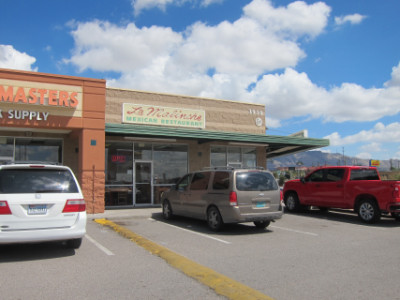 La Malinche is one of El Paso’s “classic” restaurants, having been in operation for as long as I can remember and probably many years before that. There are three restaurants in the city; this one is on the west side at Doniphan and Sunland Park (just a couple of blocks west of La Malinche is the State Line Restaurant which straddles the Texas-New Mexico border). My older reviews state that the food does not vary much between the different locations, but that I liked the west side restaurant because it had a larger dining room that I found more comfortable than the others. Now I honestly do not remember the food at the other restaurants, but I have enough confidence in my earlier memories to say that it is about the same at all three restaurants.

In my early reviews I stated that La Malinche had a homey atmosphere and food that tasted as if someone made it in their own home. Now that I have other resources to consult such as Yelp I find that many other people are making this same type of comment about the home made food. I would say that by definition this is probably simple food–nothing too fancy or that is meant to dazzle people with their innovative recipes. Instead it is straightforward food that stands the test of time.

Over the years I have tried a number of items here, but by the time I published the first review my go-to items were narrowed down to red enchiladas, chile rellenos, and entomatadas. I usually went for the entomatadas because I could not find any others in town that were as good. I also really liked the horchata, although these days it is not on my diet very much because of the calories and sugar content.

One thing I do remember vividly from earlier visits was that although they had an 8:00 p.m. closing time, I tried several times to go around 7:30 or so and either it was OK or else they would say they were closed (when there were very few other customers). After the pandemic a lot of things have changed, including the fact that I think they have better customer service. In addition, though, they now close at 4:00 p.m. 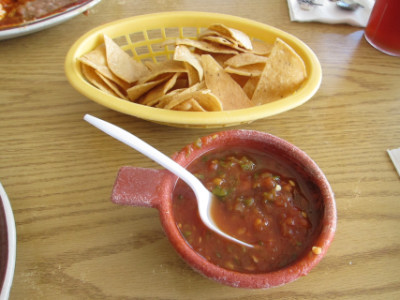 Just about every restaurant in town serves good chips and salsa, so it is hard to make note of their differences and to really say which ones are best. I have a habit of taking leftover Salsa home, though, and it is there that I noticed how distinctly fresh and flavorful this one was compared to others. In my recent memory this one is really at the top of my salsa list. Earlier I had also noted that it was jalapeño based rather than puréed, and was spicy as a result of the chiles that were used. I think it is always a good thing for salsa to be genuinely spicy as long as it is not this way because it is full of seeds (and the one at La Malinche does not have a noticeable amount of seeds).

The Chips are good. I used to think they were overly salty but I have not noticed this recently. 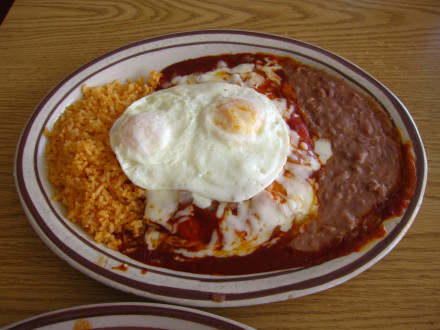 Red Enchiladas were one of my favorite items in the past. Recently I have not thought they were in contention for the best in El Paso, but they are good enough that I really enjoy them (especially with an egg on top). They have had a “strong chile flavor” which I like, but I think it is good to have the egg to provide an offsetting flavor.

For breakfast you can get Enchiladas Montadas where the enchiladas are flat. I think these are some of the best “montadas” I have tried in the city, but instead of rice and beans I think I would like some of the side dishes served in other restaurants (such as hash browns). 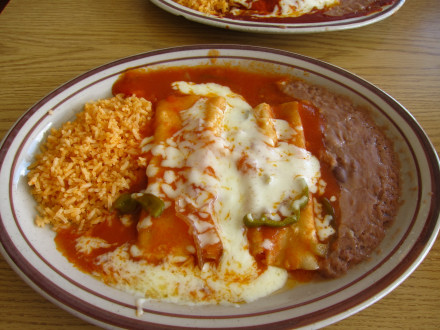 Entomatadas have been my favorite item at La Malinche for a number of years. Nobody else seems to do them as well as here, or at least no one that I have found. These are made the same way as enchiladas but instead of chile sauce they use a sauce similar to the “Spanish sauce” at many restaurants (actually I think it is a ranchero sauce but just not very spicy). The cheese is also excellent, and is also a key factor (but the sauce is special in its own right).

The green peppers keep it from being completely devoid of spice, and along with its excellent flavor I think the entomatadas are really worth checking out.

Other Items
In the past I thought the Chile Relleno was excellent, but I have not tried it recently. It has the same Spanish sauce they use on the entomatadas, but the chile itself is spicy, making this fall into the category of spicy Mexican food. I have found the Spanish sauce to be the classic way to make El Paso styled chile rellenos, and based on this I would say to try the ones at La Malinche because they really do have the best Spanish sauce I have tried.

Tacos contain potato mixed with ground beef. This is a popular local style, and the potatoes are a way to make the tacos more affordable, but this is not my favorite version of the beef taco.

It is somewhat annoying that they will not make substitutions on the combination plates, but this is balanced by the fact that prices are cheaper than at many places. It may be worthwhile ordering more than you think you can eat in order to get all the items you might like to sample 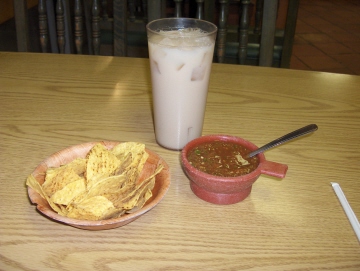 Horchata with chips and salsa

Horchata is excellent, and like everything here is made the classic Mexican way (in the Chihuahua border style).

An Overview
For a while La Malinche had five locations throughout the city, and now they are down to three. This is still a lot for a restaurant which is competing against numerous others which are serving the same type of food. Most importantly, though, the reviews say the same thing I have thought in the past–all of La Malinche’s locations have good food.

Like most Mexican restaurants, though, there are certain items that stand out and seem to make it worthy of a special trip. For me this has been the entomatadas, and I still find them to be the best I have ever had. The sauce is excellent, but the cheese also plays a large part.

Recently I have begun to come here for breakfast as well. It is not that they have the absolute best Mexican breakfast in the world–it just seems better than many of the alternatives. This is especially true in the fact that the food tastes fresh and does not have an oily aftertaste like some of the places that seem as if they do not change the cooking oil often enough.

Cuisine: Mexican El Paso
Cost: $$
Hours: Open Daily (breakfast & lunch only)
Accessible: Yes
Smoking: No smoking
Alcohol: Beer and Wine
Credit Cards: They add a surcharge to the bill if you use a credit card