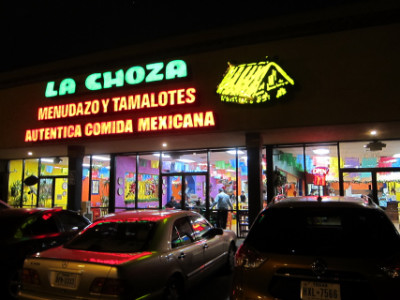 My visits to La Choza span more than a decade and the length of El Paso, but the result has always been the same–good food that is “authentic” as the restaurant claims. In 2006 and 2007 I made several visits to the west side La Choza which is now closed, and recently I was able to go to the original restaurant on Zaragoza Road in east El Paso (although I believe the original restaurant is actually in Ciudad Juarez). Both El Paso locations have stayed true to the original Chihuahua style tastes, and have not changed at all because of being located north of the border.

The El Paso Times spotlighted La Choza in its 2006 Best of the Border awards as serving the “Best Menudo” and as a runner-up in the “Best Tamales” category (as is reflected by its name Menudazo y Tamalotes). La Choza is certainly one of the city’s better Mexican restaurants, and especially in the category of what I call “Chihuahua style Mexican food,” or food that is more authentic and served the style that people tend to eat every day in Ciudad Juarez and throughout northern Mexico.

Probably the best thing to get here is a combination plate. They make it easy with about eight different plates on the menu, and an almost unlimited variety if you make substitutions (which they seem to make very easy to order). On the plates I have ordered the tamales seem to be a “must include” item. 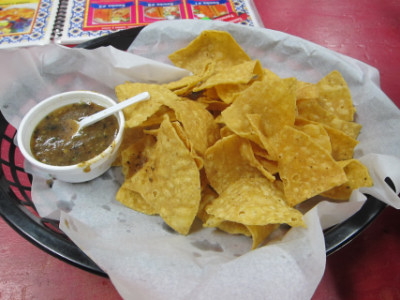 The chips and salsa are usually a tip-off as to the quality of the meal that will be served. The Chips at La Choza were more than impressive– home made, thick, crispy, not too greasy, and only a bit too salty. In fact, these may be viewed as the classic El Paso and northern Mexico style chips by which others can be compared.

The Salsa may be even more impressive–a thin liquid with just the right amount of diced chiles and not too much cilantro or other spices that typically ruin a good salsa.

Appetizers and A La Carte Items 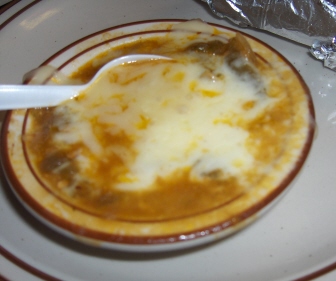 To me a very special meal would include a small order of Chile con Queso. A lot of restaurants serve this dish, but other parts of the country do not compare to the northern Mexican style that is typified by La Choza. This dish is served with a thick cheese that does not turn either too hard or too gooey, and fresh green chile strips that taste as if they come from the local area. Some people get the full order as a dinner, but my stomach is not prepared for that much green chile at one sitting. I loved the appetizer, though, and thought it was one of the best versions of chile con queso I had tried. Others in El Paso serve very good queso, but I thought the one at La Choza was probably closer to the ones I have eaten in Mexico. 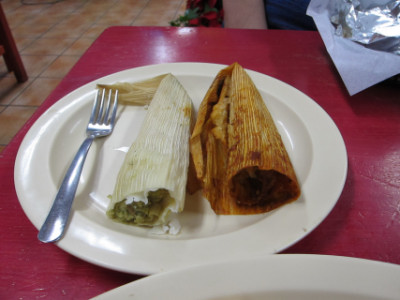 They frequently offer special tamales that are not regularly on the menu, such as the green and red ones shown here. I do not know what they are called, I only suggest getting the ones freshly made no matter what they are. 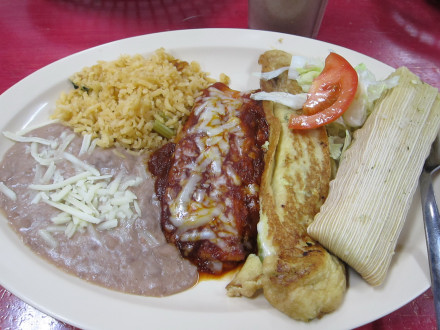 The Combination Plate Number 6 has what I normally consider to be some of the best items to order, but here the best one is the Tamal. All the items together, though, made a very enjoyable dinner.

The Chile Relleno surprised me by coming plain without sauce on top. It also surprised me by being less greasy than most. I did not find it as flavorful as most of the ones I consider to be “New Mexico” style, but I think using the type of chile, cheese, and breading that are consistent with Ciudad Juarez style food, La Choza did a very good job.

The Red Enchilada had good cheese, but came with a rather weak red chile that was diluted with too many spices. If you are used to the ones in Ciudad Juarez you will feel right at home with the enchiladas here. Personally I prefer the ones that are more popular in El Paso using stronger chiles and without as strong of a cumin flavor. 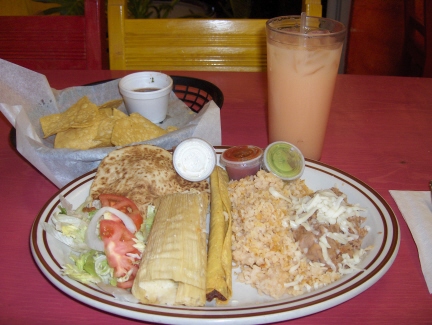 The Flauta on this combination plate was also among my favorites. It was notable in its lack of greasiness. The guacamole, served in a small container, was excellent. I was served sour cream that was still cold and hard to use as a dip, but it was better on a subsequent visit. La Choza also provides a third topping that completes the colors of the Mexican flag: red, white, and green. The red container has a special red chile that is more robust with flavors than it is spicy (if you want something extremely spicy you can use the salsa served before the meal). Ciro’s has been known in town for serving the same style flautas with three toppings, but I thought the one at La Choza was equally good, if not better.

The Gordita was enclosed in a soft flour tortilla shell, with roast beef inside (other types of meat are available). While this type of meat seems superior to me than the ground beef used at Little Diner and other restaurants, the unfried shell made this a different type of food than the border style gordita–really it is more like a soft taco. I enjoyed the way La Choza made it but it was not really the same dish as the deep fried ones served at Little Diner and JJ’s.

The Chicken Tamal with green chile was the first thing I ordered after I read that La Choza was one of the best places in town for tamales. It had the traditional corn husk that was opened to reveal a moist masa outside with chicken and green chile inside. I thought the chicken was the weak point of the tamal, being a little dry. The green chile was not as robust as at other restaurants, but it was one of the better tamales I have tried. While there are different styles of tamales in Mexico and throughout the American Southwest, it is not easy to get a masa that tastes just right. I think the one at La Choza comes pretty close.

A Melón (canteloupe) drink I ordered was very good– not too sweet and a good representation of this type of agua fresca drink. 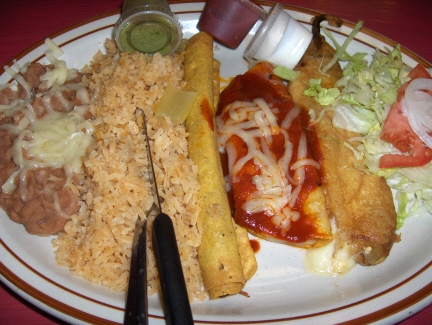 This combination plate does not present any new items, but it shows how you can get just about any combination of items that you wish. 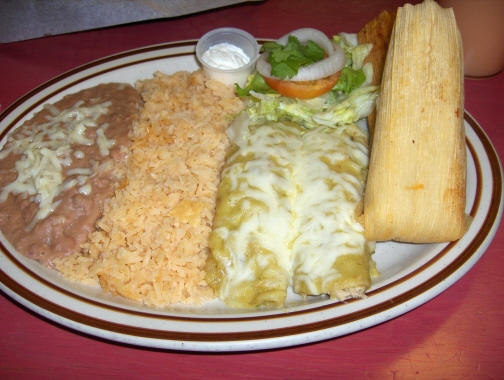 Green Enchiladas made Ciudad Juarez style are milder than the ones with New Mexico chile, and sometimes have a different flavor. The trick I have found to ordering them is to always get a chicken filling, and when possible get them with sour cream (enchilada suiza style). At La Choza it turned out I had nothing to worry about, since the green chile was quite good (although still not very spicy). The Mexican white cheese added a flavor dimension that is not found in New Mexico enchiladas that use yellow cheese, so in my opinion the green enchiladas at La Choza are on par with some of the city’s New Mexico style enchiladas. I enjoyed them served with chicken and a container of sour cream that was served on the side, although I think ones without chicken might be my first discovery of a truly good meatless dish at La Choza.

Other Notes
The prices were a little higher than are normally found in El Paso Mexican restaurants, but I thought were a bargain for the quality of food served. Even the items that I thought did not have the best flavor were very fresh and of good quality.

The service has always been outstanding even though I have gone to different locations and have had different servers.

This is a “late night” restaurant for Fridays and Saturdays since they are open 24 hours both of these evenings. This is also a time when they sever the “special” tamales.

Even if a restaurant stays true to “Chihuahua style” cooking, there is still a great allowance for individual recipes and cooking methods. I like the way La Choza prepares the food, and I have found the total meals to be a pleasurable experience that makes up for any specific shortcomings found in individual items. To me the only real shortcoming has been in the red enchiladas, but this has been my general experience with Ciudad Juarez style restaurants. The green enchiladas and just about everything else, though, have been outstanding.

More than being good, though, the food has been very enjoyable–something that is intangible but very important. I hope others will enjoy it as much as I have.