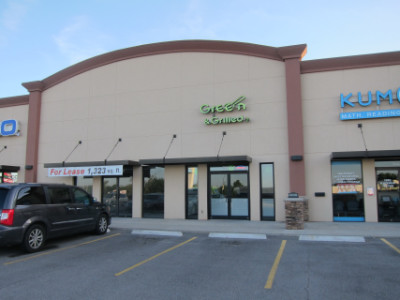 Green and Grilled on Northwest Expressway

Note: This review was made for both the old location at 8547 N. Rockwell Ave. and the new one on Northwest Expressway. The restaurant is now closed, but I do not know if the food truck is still operating.

Sometimes I lament the lack of real choices in restaurants, and it begins to look as if they have to specialize in greasy fried foods to survive. I eat my share of this type of food, but one of the purposes of this web site is to seek out places (particularly little known restaurants) that are different from the norm. Green & Grilled is one such place that provides a contrast to the average diner or burger joint. Green & Grilled concentrates on healthy foods, but with satisfying flavors. It is a little different, but I found it to be very good.

Green & Grilled serves American food, including grilled meats, salads, and soups. If I had to describe a down side to the restaurant it would be the limited menu (although once people try it I think they will be happy with what is served). In fact, the small menu, casual setting, and lack of table service are not normally characteristics of a restaurant to which I would give such a high rating, but the food really is that good. 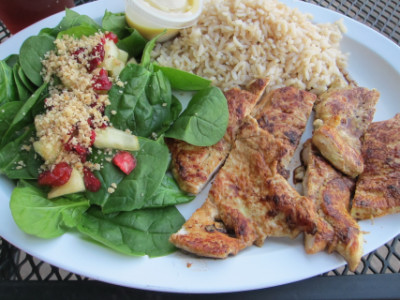 Chicken, apple and spinach salad, and brown rice is my favorite combination

A “regular order” here consists of grilled meat (marinated with adobo flavoring), a half salad, and a side dish. Soup can be substituted for the salad at no extra cost. Most other changes would involve paying extra (such as getting both a soup and a salad). I get full either doing it this way or getting the standard dinner.

A full order of salad is not only larger, but also gives a choice of meats that can be added.

Three kinds of soup are served every day, and additionally they offer a daily soup Monday through Saturday. Several of the daily soups are my favorites when they have them, but in a couple of cases I prefer the ones that are available all the time. If you go in the evening they run out of the daily soups more frequently than the ones they have all the time (I would say it is about 30 to 40 percent of the time that they sell out of at least one of the soups).

The meat also has a unique flavor that sets Green & Grilled apart from other restaurants. The owner is from South America, and specializes in adobo flavored meats (the tofu is also adobo flavored). In this case I think the restaurant has incorporated the best elements of South American cooking into what can otherwise be described as American food. Everything here, though, is healthy (I’m taking their word for it that the brownies would also fall into this category).

The Meats
Grilled Chicken has been my favorite of the meats served, and I was very impressed with the quality of the chicken, the way it was cooked, and the adobo flavor. The adobo was mixed with pineapple, and I thought it had a very Latin American taste (although it is not spicy). 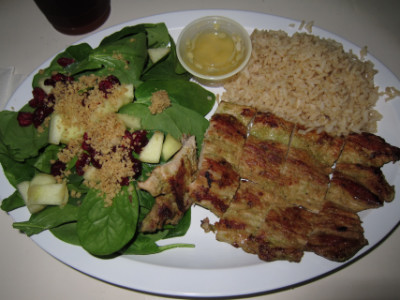 The Grilled Pork is also excellent, and I would say is sometimes better than the chicken (the inconsistencies of the pork are more because of the amount of fat or gristle than because of the flavor or the way it is cooked). Either chicken or pork is an excellent choice– I would suggest ordering based on the type of meat you normally prefer.

I sampled the Sirloin Steak and thought it had a good flavor. The beef tasted particularly good with the adobo flavor, and tasted somewhat like the Worcestershire sauce and other spices used in a sirloin patty. In 2013 the restaurant started charging more for beef than the other meats, and to me the other (less expensive) meats are equally good. 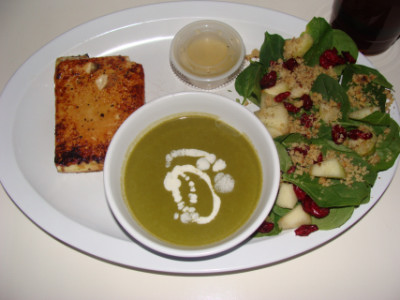 I am a big proponent of substituting tofu for meat whenever possible (provided you do not give up the flavor or major characteristics of the dish). The Grilled Tofu served at Green & Grilled, though, came in a large slab and there was no way to disguise its flavor or texture (neither of which I found to be very enjoyable). The adobo seasoning, though, was as good as it had been with the meat dishes, and overall I did not find this to be a bad dish (just one that is not of much interest to me).

Salads are a large part of the menu, since a half order comes with every dinner plate or a full salad can be ordered. I have found the variety of salads to be quite good, and each one has its own house made dressing.

The Apple Spinach Salad has been my favorite so far (and is shown in several of the above photos). The salad comes with spinach, diced green apples, cranberries, walnuts, and an orange vinaigrette dressing, but I have to say that the main reason I like it better than the others is because of the fruit. 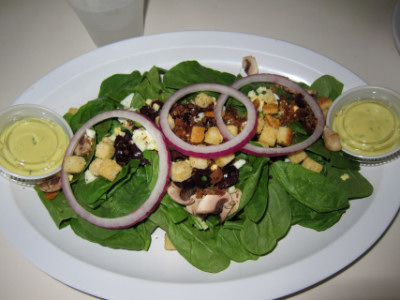 The Bacon Spinach Salad comes with spinach, olives, chopped eggs, and bacon with honey mustard dressing. The menu states that the salads are all natural, and the bacon consists of bacon bits sprinkled on top. 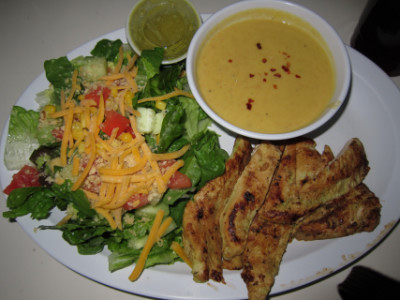 The Tropical Salad probably has the best dressing of any I have tried here, and is a very flavorful salad as well. I generally do not have a very high opinion of salads covered with yellow cheese, but this one is very refreshing and lives up to its name as something that reminds me of the tropics.

Three soups are available every day: Vegetable, Portobello Mushroom, and Creamy Butternut Squash. I think I have yet to try the squash soup, but of the remaining two I prefer the Portobello Mushroom Soup. I think I liked the fact that it had a mushroom flavor but it was puréed so that it did not have a mushroom texture. The Vegetable Soup had a little too much of a pepper flavor for me.

Daily Soups
My favorite of the daily soups is the Spinach Soup served on Wednesdays. To me it is perfect in flavor and texture.

I think the Cauliflower Soup (served Mondays) is also very notable, and although it is peppery like the vegetable soup, I do not consider the pepper to stand out as one of the prominent flavors. I think I only tried the Broccoli Cheese Soup (served Tuesdays) once, I thought it was very good as well. I have come to appreciate the Carrot Soup (served Thursdays) more as I have eaten it more.

Side Dishes
I would definitely recommend the Brown Rice as a side dish, and to me this is the best choice they offer. It sounds like something that would not have much flavor, but I think it goes well with the food. 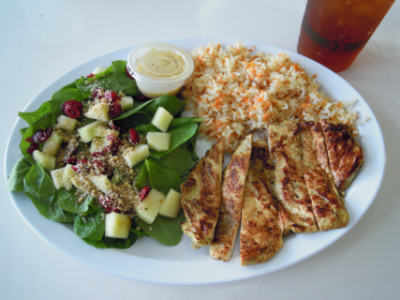 The Carrot Rice is more visually appealing, but to me it is more like rice you can get at other restaurants (while I don’t think anyone has brown rice as good as the one at Green & Grilled). 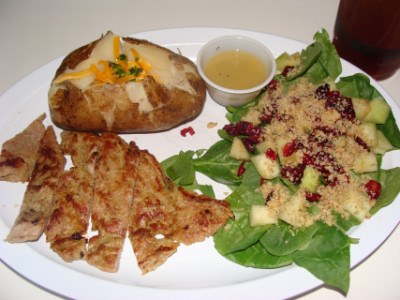 Dinner with a steamed potato

The Steamed Potato is probably the most filling of the side dishes served here, and I also think it is one of the best.

Half Soup and Half Salad 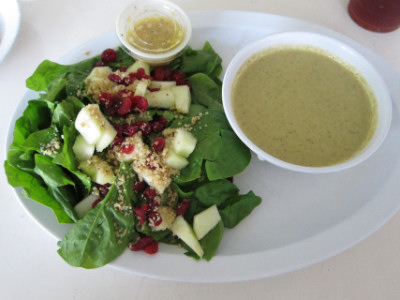 The “Half Soup and Half Salad” is not listed on the menu, but is available. To me it is not a very good choice budget-wise, because it is almost as expensive as a regular dinner (but you do not get the main dish with it). 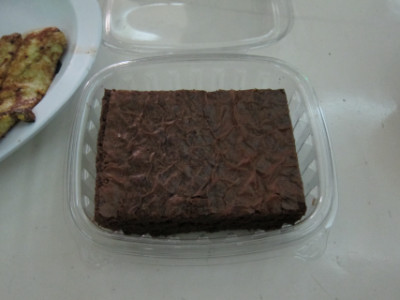 My current favorite dessert is the Brownie which has a rich chocolate taste and which is big enough to last me for two or three desserts (I have no idea whether the brownie is actually considered “healthy” or not, but it does not taste “watered down” like most things that are supposed to be healthy). 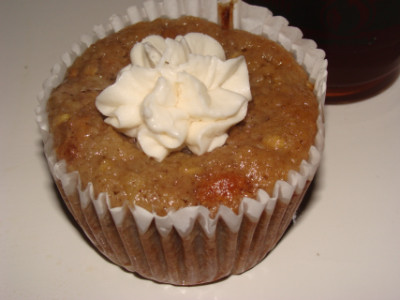 The Pineapple Zucchini Cake is a good choice for those who like a lighter and less sweet taste (although the pineapple and zucchini gave it a vibrant flavor). For those like me who are not sure they would want a dessert with zucchini, I will say that the flavor that could best be discerned seemed to be the pineapple.

Both the brownie and zucchini cake are prepared by an outside company (Debbie’s Sweet Stuff) and are usually but not always available at the restaurant. 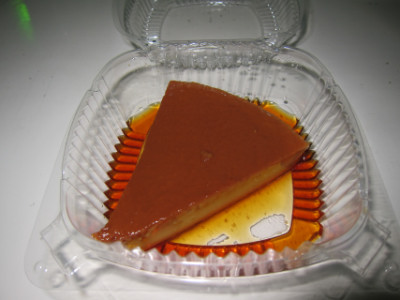 Flan is a very good choice to go with the Latin American flavor of much of the food here, but I do not always see it in the display case.

Things to Know About the Restaurant

This is a casual restaurant where they bring the food to your table but after that you are on your own to get drinks, silverware, etc. The food itself is almost fine dining in its quality and flavor, but it is really just simple food prepared well and which provides something as healthy as possible. I don’t consider it expensive, but they have raised the prices over the years so that they can maintain the same quality.

The items I like here are chicken and pork (they do have a good salad option but this is not really something that interests me very much). What they do offer, though, is so good that I keep coming back (and I do not consider it boring to get basically the same things every time).

With Latin flavors and healthy food, this covers many of the bases I am looking for in restaurants to include on this blog.