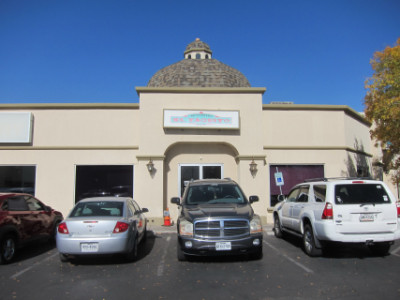 It was not until I began writing this review that I discovered that there are actually two “El Taquito” restaurants in El Paso, and apparently they are unrelated. I know this is not supposed to happen, and there are trademark and copyright laws on this subject, but I think in this city if a situation is not really hurting anybody and nobody complains about it, they are not going to cause a scene about it. Just FYI, though, the other El Taquito is on S. Piedras Street, is a neighborhood restaurant that has been in operation for over 25 years, and has a different menu than the one here.

I think this El Taquito has been in operation for at least a quarter century in this location, and is probably much more well known because of its location on a major arterial which connects Interstate 10 with the airport. It was founded by the current owner’s father who had a restaurant in Coahuila, Mexico serving the same menu, and who moved it to El Paso. According to the waiter the food had the same popularity in Mexico that it has here, and I encountered an almost full dining room on my initial visit which seemed to avoid a waiting line outside only by providing incredibly quick service. The clientele seemed to be largely working class people that needed to get back to their jobs by a certain time, and the draw here seemed to be that you could get fast food service and fast food prices for a breakfast or lunch that was clearly several steps above fast food standards..

For several months El Taquito was listed as the top restaurant of any kind in El Paso on Yelp’s Top Ten list, and as long as I have been checking it has always been in the top five. After visiting here I would say that this is definitely chow worthy food that would be a priority for anyone interested in the best Mexican food in the city. For my number one pick I would probably go with one that had more variety and did not have so much fried food on the menu, but nevertheless I was very pleasantly surprised about the quality and flavor of the food. 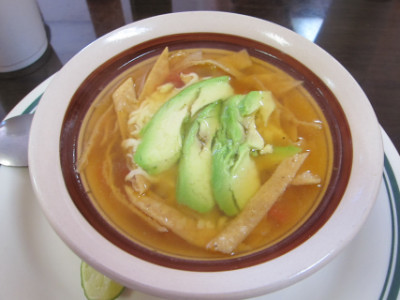 El Taquito does not have combo plates that would provide a sampler of different foods, but it does have a “comida corrida” with the soup of the day with your choice of main items that is available until the soup runs out. I think I lucked out by coming on a Monday when they had Tortilla Soup as the soup of the day (it is also the soup of the day on Friday and Saturday). On Tuesdays they have chicken soup, and the other days are caldo (beef soup).

I have been on a quest for good tortilla soup for a number of years, and recently found a very good version at Mamacitas. Even in El Paso, though, there are not as many notable soups as one might think. I am not ready to say whether the one here is better than at Mamacitas, but I do believe it is just as good. Both have the requisite Mexican cheese and crisp tortillas that make them notable (and definitely fill the void from other restaurants which are now closed that used to be reliable sources for tortilla soup).

I like many versions of beef soup in El Paso as well, but finding good tortilla soups has been much more difficult, and for my own taste this is more of a treat when it is done really well. 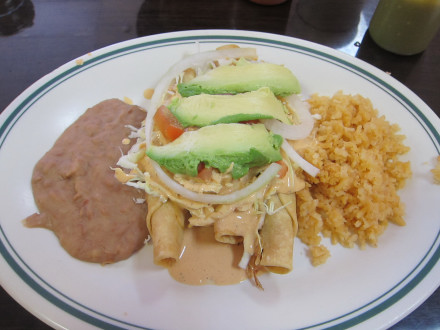 I think the word “flautas” (flutes) is a term that is interchangeable with “taquitos,” although flautas is the the name usually used locally. One characteristic of flautas that might not be true of taquitos, though, is the expectation that it will have some type of topping. El Taquito has several choices, but my waiter (as well as reviewers on Yelp) indicated that perhaps the most popular here was Flautas with Chipotle Sauce. After ordering them I discovered that they are popular for a good reason–the chipotle sauce in combination with the avocado and cabbage on top as well as the shredded beef inside created one of the truly worthy taste treats I have found in El Paso. The sauce was almost like a chipotle mayo that really reminded me of the aioli that seems to be quite popular in Oklahoma restaurants and elsewhere, except that I thought this was better. In the past I have had forgettable experiences with chipotle, but this was something that really worked.

The chipotle was not really what I would call spicy, but they have red and green salsas on the table that will make it spicy in a hurry. What I really liked, though, was the fact that these salsas added just the right flavor to make the flautas complete in my mind and for my taste buds. With the salsas this was truly one of the most enjoyable flauta dishes I have experienced.

The other important factor, though, was the fact that the flautas were fried but I did not consider them to be too greasy. I certainly think the restaurant takes care in using the freshest and lightest cooking oil possible so that my normal hesitancy to order fried food was not something that would be a factor on repeat trips.

Other types of flautas on the menu include the “regular” topping, and BBQ, bistek, or picadillo can be put inside. I went with the “default” (shredded beef), and I think it was a good choice.

Other Notes
The restaurant was very busy and I think if you go right at noon there might be a wait for a table, but it is certainly nothing like some other popular restaurants in town where the wait time can be substantial.

El Taquito also serves breakfast, and there are a few lunch items that are not fried (such as milanesa, burritos, and taco salad). All the prices on the menu were under ten dollars (which I think, combined with the excellent flavor, makes this one of the most popular places in the city).

The restaurant is not visible from Airway Blvd. but I think there is some kind of sign indicating where you should turn in. A GPS would probably also be a good idea. In any case, the traffic in El Paso is not so bad that you cannot go around the block or double back in case you miss it.