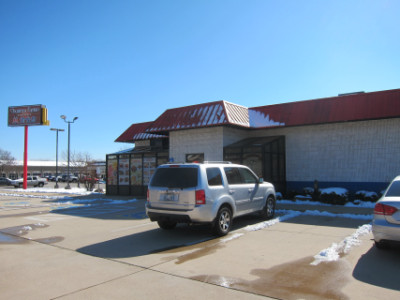 For years I had hoped for a Chinese restaurant in far northwest Oklahoma City that focused on authentic cuisine rather than serving one more version of the typical American style dishes (for those who are not familiar with what I am describing I would say try the authentic food–there is a reason it is still popular in China while the American style dishes have not caught on quite yet).

Obviously I am leading up to the fact that Chuanyu Fusion is about as authentic as it gets anywhere in the United States. It is Sichuan (or Szechuan) style, and while this has the connotation of being fiery hot, not everything on the menu is that way. I think just about anything served can be made so that it is not spicy, but on many dishes this would change the flavor component so that it may not be the best choice in terms of the taste. The menu items are listed with zero to three chiles depending on their spiciness. I have tried some of the spicy ones and even these are not as spicy as I found in Sichuan restaurants on the west coast. Frankly I think I am glad that this is the case, but I also know that the chefs here can make it that spicy if you really want it that way. My main point here is that the clientele in this part of the city is not primarily from China, and the restaurant expects that there will be a learning curve with some people for some of the dishes. I think their default is authentic on the flavors but not necessarily on the level of spiciness they would serve in China. I am sure, though, that they can tweak the food for anyone who is used to eating it a certain way. 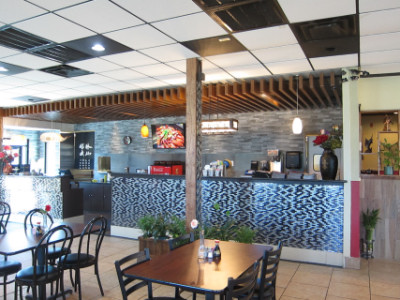 Now that I have probably scared off some potential customers, I would say they do have some American style items on the menu, and the Sichuan style food varies in such a way that you can start out with items that are much like the “Szechwan” food served in American style Chinese restaurants but with more flavor and higher quality ingredients. From there you can move on to whatever you would like to try. Personally I am not ready for the frog and I am not sure about the pig intestine, but there are plenty of other items that I hope I will be able to try.

As much as I was excited about this restaurant opening, it was somewhat of a letdown that they have not reopened the dining room (as of summer 2020) and only serve takeout through the Drive-Through window. Of course the food is still good but for me the jasmine tea they served in the dining room was so good that it was an important part of the meal (and is not available for take-home). I am just hoping that they will continue to be supported by customers and that they will be able to open the dining room again at some point.

Appetizers
I have not yet tried any of the appetizers but they have some that sound very interesting including buns, dumplings, scallion pancakes, etc.

By the way, something to notice about almost every section of the menu (including the appetizers) is that it looks as if the first items listed are the authentic ones, and it works down to the American style dishes listed at the bottom. 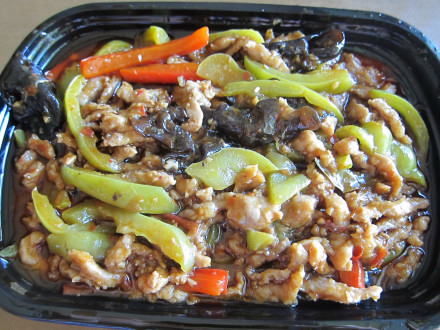 In China the word for “pork” also seems to serve as the generic term for “meat” (much as the words “meat’ and “beef” seem to be interchangeable in Oklahoma). For me, pork has always seemed to be one of the best ways to delve into the world of Chinese food in general and Sichuan cuisine in particular.

Shredded Pork in Garlic Sauce is something that for a while I avoided at Sichuan style restaurants, though, because it sounded like something they put on the menu to cater to American audiences. Also known as “yu shang” or “yu xiang” pork, it is actually a Sichuan dish that is not as sweet in China as many American restaurants make it, but it is a very flavorful way to enjoy a true Chinese dish. One thing I like is the mix of vegetables, and the sauce here is one of the better ones I have tried.

I think this dish works very well for takeout, even if you reheat it and eat it later. 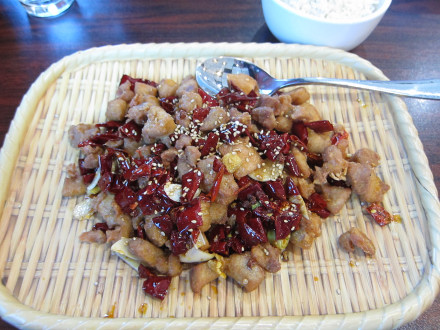 One of the more popular dishes here seems to be the Chongqing Diced Chicken with Chili Pepper and Pepper Corn. It is something I tried for the first time at Chuanyu Fusion, and it was one of the best items I have had here. It has a very light sauce, and even though it is loaded with chiles they are not terribly spicy. The main down side was that it did not have any vegetables other than the chiles (they are a good source of vitamin C though and I am sure have many other nutritious properties). The Chinese style of cooking is mostly to serve meats and vegetables separately, so it is not that the people in Sichuan are against vegetables. For sometime when I can forego the vegetable serving, though (or order it separately), this is a very good choice. 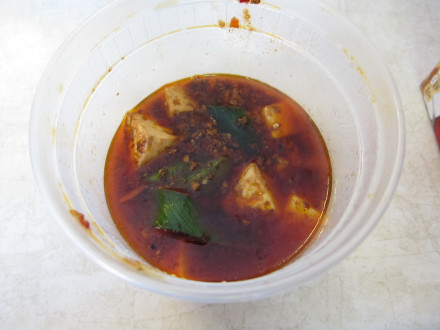 In China the vegetable dishes are a little different, because it usually means they are mostly vegetables (and many times have a little meat). This is the case with Ma Po Tofu which is listed in the “Vegetable” section of the menu, but contains minced pork. A sign that it is authentic Sichuanese style is that it is almost floating in a heavy oil that is really much more appetizing that it looks. Chuanyu Fusion goes heavy into the authenticity aspect of this dish and I think it is a good choice if you want something spicy (it is rated as “two chiles” on the menu). Without the spiciness I do not think the heavy oil would really work very well, so I do recommend ordering it as they normally prepare it. 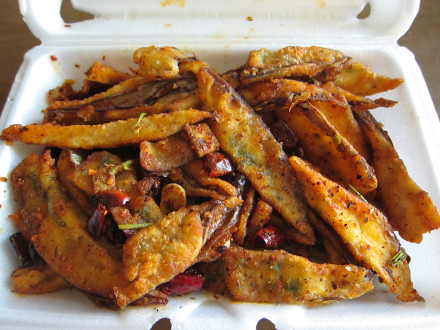 One dish that is very popular with Yelp reviewers and others is the Crispy Eggplant with Szechuan Spice (which is actually a vegetable dish with no hidden meat). A friend of mine said the Chinese name for this dish is literally “eggplant cooked in a lot oil.” Perhaps this is the reason for its popularity because I generally only like eggplant if it is well disguised.

However, I was disappointed with the strong “cumin bomb” that I especially noticed in the aftertaste of this dish. Using cumin is one of the elements of some of the authentic Sichuan dishes, but one that I try to avoid (it is not an aftertaste I like to have in my mouth and I think this dish has a particularly heavy dose of it). I am giving this dish four stars based on my personal taste (rather than the five stars I normally give to an authentic dish that is well executed). I do applaud them, though, for making the eggplant something that I consider to have a good flavor. 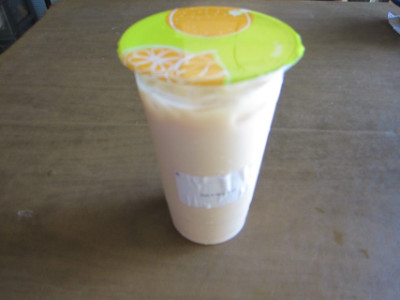 The Black Milk Tea is available for takeout, and comes with a sealed lid so that it does not spill. Although it is quite enjoyable (and goes well with spicy food), I thought it was a special treat to get the brewed jasmine tea that was available when they had dine-in service.

Overall Assessment
This is such a fantastic addition to the dining scene that I hope others discover it (they apparently already have a pretty good customer base but I worry because this building is not easy for people to find and several restaurants have already failed in this location).

Eating in the dining room was better because of the great tea they had, but also because I could ask questions of the staff and take my time in ordering. Right now they are doing takeout only (or delivery through the delivery companies). It is still possible to ask them questions when you order but for me what makes it easier is that I got a printed menu when the dining room was open (the menu is included at the end of this article). They may still have some available when you go through the drive-through window but I do not know if this is the case or not.

All ethnic food is something I enjoy exploring, and I have to find good dishes by trial and error. I did not like the amount of cumin they put in the fried eggplant, but everything else has been a winner and I am anxious to try as much of the menu as I can (I will probably let others tell me, though, how they liked the frog and the pig intestine).

Note: Former restaurants at this location (all of which did not actually close but moved to other locations). List is from the most recent to the oldest that I can remember: 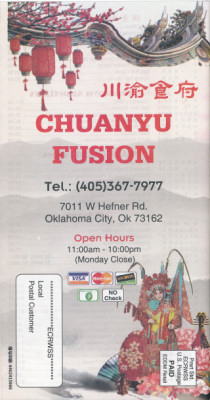 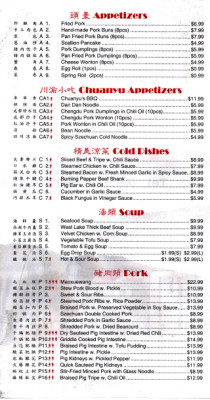 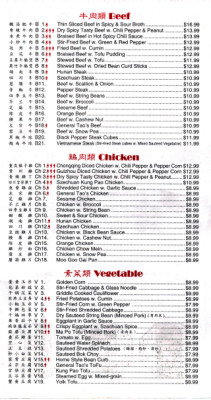 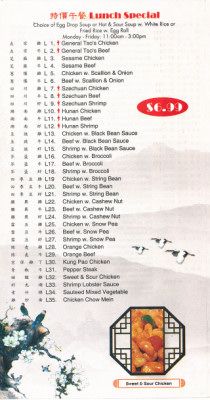 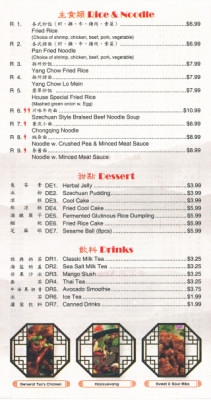