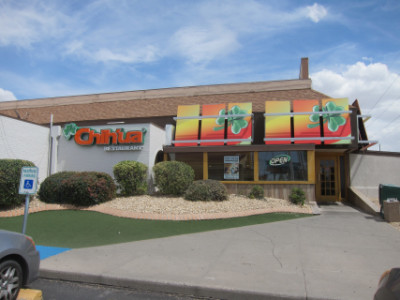 El Paso has so many Mexican restaurants that I would defy anyone to try to come up with an accurate count of them. Among this wealth of possibilities it is understandable that I would miss a few–even some of the really good ones. Nevertheless I have a hard time understanding how Chih’ua, a large restaurant visible from Interstate 10 in the east side’s “Restaurant Row,” could escape my attention for the quarter of a century it had been operating before I was able to visit. I do not think it was ever on any list of people’s “must try” restaurants or that it was prominently featured on web sites such as Yelp, yet I think somewhere it should have been mentioned as a place that is worth trying.

The easiest way to pronounce “Chih’ua” seems to be by saying “Chihuahua” without the final syllable. The apostrophe is not some secret way or writing the word in Spanish slang but rather I think this was a way the restaurant could trademark its name. The food here is Chihuahuan style although I believe it is more upscale than the great majority of restaurants in its namesake state. The restaurant’s web site says they have four locations in Mexico (I assume that some or all of them are in the state of Chihuahua).

The web site says they have 25 kinds of tacos and 12 different salsas. This is just a start to the menu which also includes seafood, all the items it takes to make a Mexican plate (such as enchiladas, etc.) and even chicken wings. Tacos and salsa do seem to be the specialty, though. These are a good fit for a region of Mexico and nearby portions of the United States that is cattle country and also loves its chiles.

Chih’ua has a buffet all day, and the food is frequently refreshed. Out of the 25 kinds of tacos that are available on the menu, I think I saw about 6 or 8 on the buffet. The buffet offers several other items such as red enchiladas (they also had enchiladas suizas which I did not try, and I found out later that this was a special). There is a separate buffet for breakfast but I do not know the details about it.

The buffet is priced in such a way that it seems to be the choice for most diners, and my waiter especially recommended it for first time diners who want to sample what they have. Mostly they have tacos. These tacos are genuinely good, there is a larger choice than you are likely to find anywhere, and most of all this is a specialty in Chihuahuan style food to which I think most restaurants in El Paso do not give full justice, but here I think you are getting the full south of the border experience.

One note about Chih’ua is that you add your own spice through the salsas you select. The food itself has plenty of flavor but it is not spicy unless you make it so. 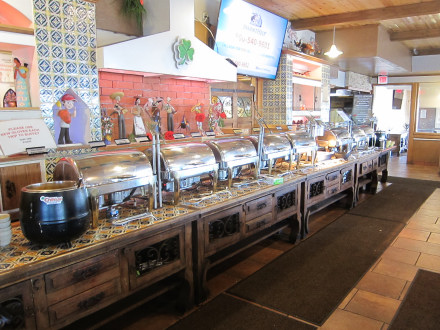 The buffet has several sections, with the largest being devoted to the tacos and main items, beans and rice, menudo, and dessert (I think these items change daily and some are specials that are not on the menu).

The salsa bar was the next really impressive aspect of the buffet (although I think if you order from the menu you can also help yourself to the salsas). The red and green salsas have a range of colors that would be similar to the variety you would get from a large box of crayons or colored pencils. Some salsas were very dark, and I could not begin to identify the different chiles that were used to make the salsas. They ran the range from a good mild burn to ones that I think reach the seven digit level on the Scoville Scale.

There is also a salad bar which includes fresh fruit. 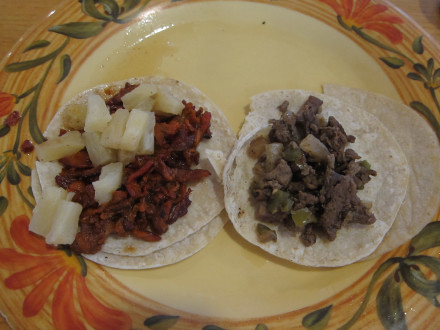 The restaurant says its specialty is Tacos al Pastor, and this was a delicious treat of slow cooked pork meat where you add as much pineapple as you want. The ones served in El Paso and this area of Mexico, though, are prepared in a different style than the one to which I am accustomed, so this was not one of my favorites out of the ones I tried (it is still very good, though). I should mention that one of the best features of the tacos is the fresh tortillas that are kept in a steamer until you are ready to take the ones you want.

Probably the tacos I would say were best were the Tacos de Alambre. Besides being very good, this is a type of taco that is either not served at other restaurants or I did not notice them on the menu (probably because I did not know what they were). Looking it up on the Internet did not help much to determine what kind of meat is used. The one common denominator in all the descriptions, though, was that they include bacon. For the ones served at Chih’ua I would say bacon is not the only factor making this a very good taco. 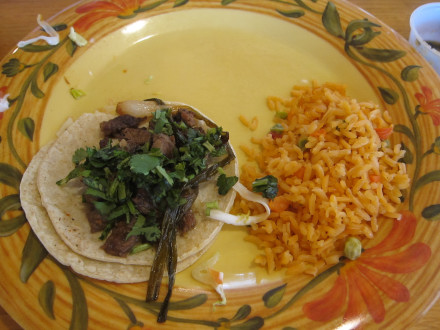 Carne en su jugo with some condiments that I added

The second taco that I especially enjoyed was the Carne en Su Jugo (meat in its juice) This is a meat I have seen in other restaurants, but I still do not know what it is. I think the key, though, is the jugo–making the meat especially tender and flavorful.

There is probably an art form in pairing the different meats with the different salsas. My trial and error, though, resulted in some pretty good results, and I would say it would be pretty hard not to get a good result here. 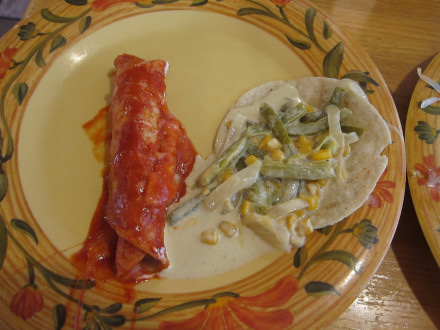 The Red Enchilada here had a good flavor but it was really not spicy at all. Inside was a cheese that was not melted, and it was pretty typical of south of the border style enchiladas (I think the El Paso style ones with the local chiles are better).

The Rajas were good but not spicy. Rajas are made with poblano peppers and queso but they are usually spread on top of something (such as on top of a chile relleno). I did not know what to do with the one here so I made a taco out of it. Like the enchilada, though, I really wanted it to be spicier.

Another tray had Tostadas so I tried this also. Like some other items here, I though the border style ones I usually get are better. 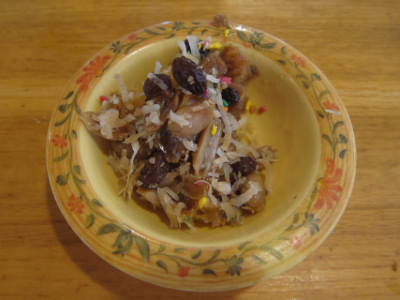 There is one tray for the dessert, and the one I tried was Capirotada. I had recently had many versions of this bread pudding because of the Lent meals I ordered when they were being served, so I had all these versions of the dish fresh in my mind. I will have to say that the one at Chih’ua was possibly the best out of all of them. I think this was mainly because of its freshness and because there was a good balance of flavors. I think, though, that they normally have other desserts such as flan.

An Overview
I do not often like to get a meal consisting primarily of tacos, but most of the tacos in the Borderland are not as good as the ones here. This was a very good taste of south of the border cuisine, and not to be discounted is the very special salsa bar they have.

For other items (such as enchiladas) I was not as impressed, although the food was in line with much of what I have tried in Mexico and in restaurants that are south of the border style.

They have Mexican style drinks such as lemonade, but I got iced tea. One advantage of the buffet is that the drink is included in the price.

I would say they really took care of me here–the waiter recommended the buffet and I was glad this is what I tried. I am sure people will be happy with the tacos here, but which ones are best would probably be a matter of taste. The buffet lets you try the ones you want (and I was a little surprised by the result).

The restaurant is in a building that my friends and I remember as being a Carrows in its previous life, so the interior is a little more upscale than most Mexican restaurants. For me it was a very good experience if not a “must try” one. I am certainly glad that I finally tried it.