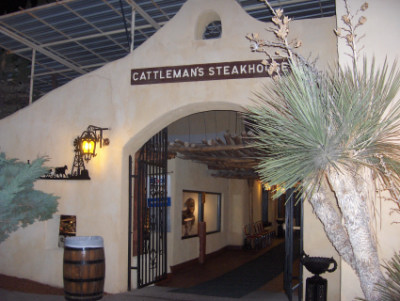 Cattleman’s Steakhouse has been known as one of El Paso’s most popular tourist attractions since its opening in 1973, providing both good food and a close-up view of the Old West as it has been romanticized by movie Westerns. Indian Cliffs Ranch was started as a working horse ranch with Cattleman’s Restaurant not becoming an integral part of it until later. Cattleman’s offers attractions such as hay rides and a children’s zoo so that families will not run out of things to see when they make the drive “out in the middle of the desert” (although still within El Paso County). This may be the closest thing El Paso has to a real dude ranch, or at least one that such great numbers of people can experience.

The number of visitors to the restaurant seems to have exceeded expectations, with several expansions taking place since its opening. Word of mouth has been the main means of publicity for the restaurant, with the desert setting surrounded by a backdrop of distant mountains being a scene that becomes etched in people’s memory. Cattleman’s at Indian Cliffs Ranch has not only become famous for its steaks, but has even served as the set for Hollywood movies, likely with the knowledge of the producers that they could get some very good food while shooting the film.

The side dishes are one of the best features of the restaurant, and I am always impressed with both the quantity and the flavor of them. The beans and cole slaw are probably my favorite, but everything served is good. 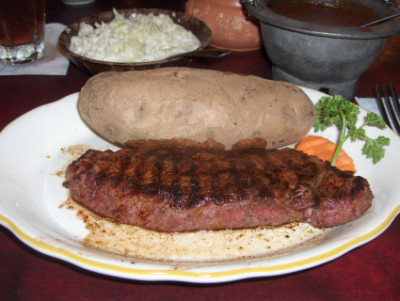 Of course steaks are the big attraction at Cattleman’s (although other types of meat are also served). The New York Strip Steak is one that I have found good over the years, and I think is a good compromise between the tenderest meat and the largest steak. The bit of steak I sampled on my last visit, though, did not seem quite as good as in the past. 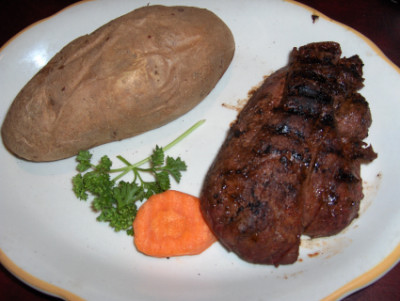 The Fillet was very good on my last visit, and is always one of my favorites to order. The quality seemed better the New York Strip, although the flavor was good on both.

I need to make a comment about the steak, however. My family used to go out to Cattleman’s because the beef was raised on the ranch, was grass fed, and was really the best we could find anywhere. I have read that the beef is no longer raised on the ranch, and that it comes from the same source that the steakhouses in El Paso get it. I do not have first hand knowledge about any of this, and I am only raising a question because I have not found the steaks on recent visits to be as good as in the past. I was definitely disappointed on my last visit compared to what I remember in the past. 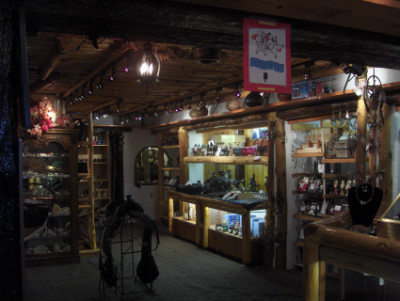 The restaurant includes a large complex of dining rooms and a gift shop. Cattleman’s gift shop is a good place to load up on El Paso souvenirs. Several large dining rooms are available that can be used for special parties, as well as a barn and picnic facilities. 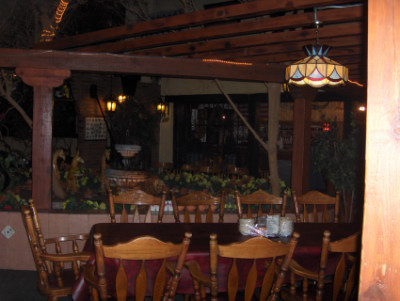 One of the many dining rooms

Directions
Cattleman’s is located north of Interstate 10 on Ranch Road 793 (Fabens exit, located east of El Paso). There is really nothing on this road until you get to Cattleman’s (it is about five miles north of the Interstate).