Although several Cajun restaurants in Oklahoma City have been very similar to ones I experienced in Louisiana, I believe Cajun Corner comes the closest. Like the other restaurants in Oklahoma City it has plenty of fried items, and I found out that Louisianans can get along very well eating a meal with not a single fried item. Still, though, I am pretty impressed with the menu here as well as the style of cooking that I found.

There is a Cajun Corner in Uptown on N.W. 23rd Street, as well as this one on Council Road. Doing a Google search I found some Cajun Corner restaurants in the Dallas area but they have a different menu, so they may or may not be related. In any case I have heard good reviews for both Cajun Corner locations in OKC. 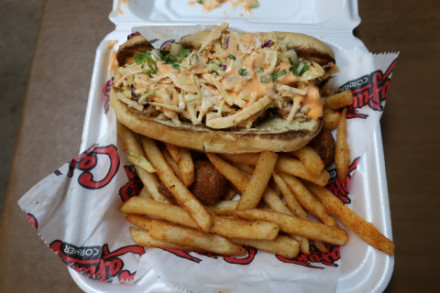 The Blackened Chicken Po Boy is one of the two options they have for blackend chicken (the other is blackened chicken tenders). It turned out that I really liked it on the sandwich, largely due the the “Cajun Coleslaw” which is spicy and very flavorful. The cole slaw is mixed with their “Cajun mayo,” so this may actually be the ingredient to eliminate if you do not like it spicy (I liked it just they way they prepared it).

To me the down side was having the fried side dishes (this combination is the only option on the menu for po boy sandwiches). The cajun fries had a nice flavored spice but I would like the option of something more “healthy” and which is not fried. 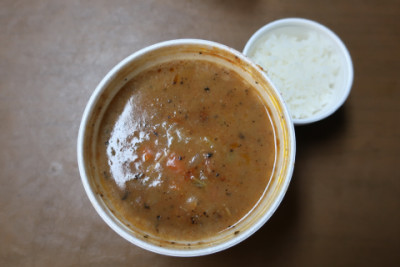 The Chicken and Sausage Gumbo Soup costs extra, but it gave me the side option I really wanted with this sandwich. The flavor of the gumbo was much like the one at The Catch (another fairly recent addition to the Cajun restaurant scene in OKC). It also reminded me of the gumbo I had in Louisiana. The gumbo alone makes me highly encourage people to try this restaurant (and it makes me think that other items on the menu would be equally good). 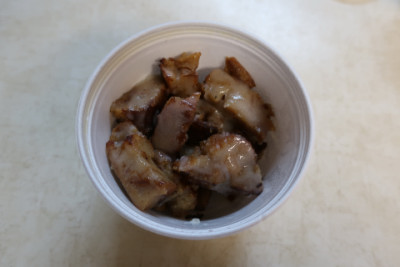 Because I take my job of reviewing restaurants seriously, I had to try one of the desserts, of course, and I picked my usual choice which is the Bread Pudding. There are several other desserts and they all look good, but at least I know the bread pudding is on par with others I have tried. The style is somewhat different from the one at Cajun King, with the one here having a sauce which is not as over-the-top in sweetness. I think the bread puddings at each of these two restaurants are about equally enjoyable.

Other Comments
The menu here seems much closer to true Cajun country food than I have found at other Cajun restaurants in the city. This in itself does not make this the best Cajun restaurant, but so far both the gumbo and the po boy have hit the spot.

Several items had a hint of spiciness–enough to give it the kind of flavor I have found with true Cajun food. The spiciest item I tried, though, was the cole slaw/ Cajun mayo combination they put on the po boy. This was both very enjoyable and very surprising (because it seemed like cole slaw with a kick). There are a number of other menu items that look as if they would be good options to try.