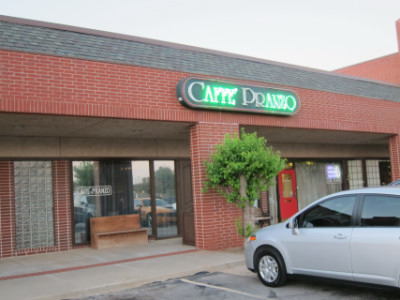 I have been told by some owners of Italian restaurants that there is no such thing as “Italian food,” but rather that each region in Italy has developed its own cuisine with certain specialties that seem to set it apart from other parts of the country. Perhaps this is why each Italian restaurant in the U.S. seems to have its own special dishes, its own twist on the food it serves, and its own way of preparing sauces and other essential ingredients.

Caffé Pranzo does indeed have certain dishes that stand out, and this is what has made it one of my favorite Italian restaurants. The quality of the food indicates that there are probably several more outstanding dishes that I have yet to discover.

Prices are a little higher than at most restaurants, and it would probably be classified as one of the city’s “special occasion” restaurants (although not to the point that dressing up would be necessary, especially since a sign in the restaurant says that it is a “neighborhood restaurant”). While some Italian restaurants in town seem to cater more toward families with pizza for the bambini and entrées for the adults, Caffé Pranzo is a more quiet and intimate place geared for a leisurely meal. 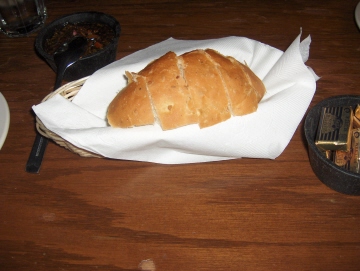 It usually takes time for the meal to be prepared, with the employees keeping a watchful eye to ensure that everything is done correctly. The wait is made less burdensome by fresh bread and a tangy and quite unique olive oil mixture for dipping. Customers are not just given a slice or two of bread, but a whole loaf, and it is quite good. 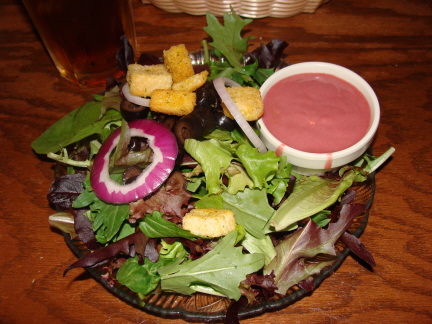 Several salads can be ordered, but I thought the House Salad that is available with entrées was just about perfect, with fresh salad greens, olives, and a tangy dressing. This is definitely one of the restaurant’s better features. It was even better, though, with the optional raspberry vinaigrette dressing, and in fact I think this is the best raspberry vinaigrette in OKC. 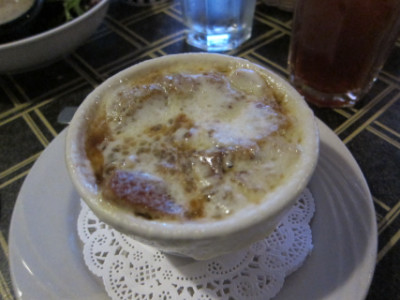 Several other appetizers are available, and the French onion soup is one of the most popular (and I think also quite good). 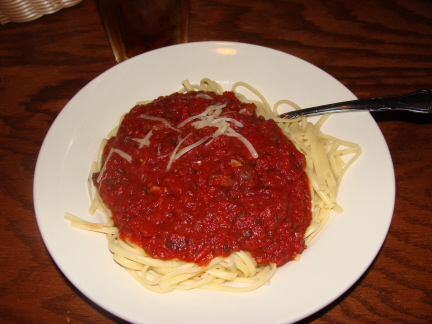 “Choose Your Own Pasta” with linguini and marinara sauce

The first dish I tried that grabbed my attention was Linguini with Marinara Sauce. This not only had an excellent plum tomato sauce but also a pasta that was flavorful in its own right. The sauce was spicy almost to the point that I wanted to give it a “chile rating” (that I usually use for Mexican food). It was also on the sweet side, but the thing that made it special seemed to be the tomatoes. Other sauces are also available but I seldom try them, I like this one so much.

The Lasagna had a fairly high tomato sauce to pasta ratio, and some flavorful chunks of Italian sausage. As has been the case with several of Caffé Pranzo’s dishes, the pasta seemed to be of better than usual quality. 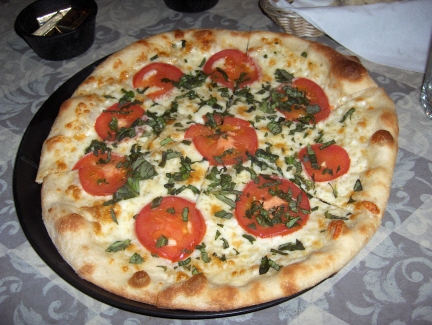 I have had mixed results with the brick oven pizzas at Caffé Pranzo. At times I have found the Margherita Pizza to be outstanding, possibly the best in OKC. This was definitely a fresh tasting pizza with the crust tasting just right. On other occasions I ordered the same pizza but found the crust to be droopy, and not crispy enough. The fresh basil has always been one of the best features, but at times there is not enough tomato. Overall, though, this is one of my favorite versions of this type of pizza. 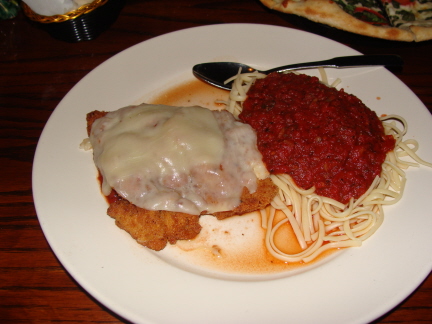 The Chicken Parmigiana had a high quality cut of chicken with one of the best breadings anywhere, and was covered with cheese and marinara sauce. Having sampled several versions of this dish at different restaurants, I thought this was one of the better ones. Having stated that this is a restaurant where several items stand out as ones I particularly like, I would have to put the chicken parmigiana at the head of the list. 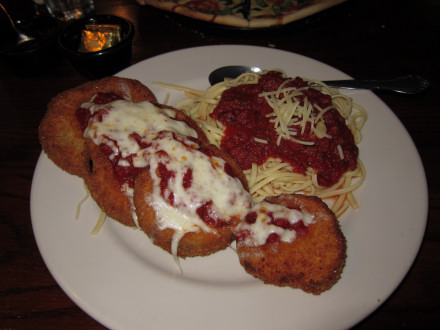 Eggplant Parmigiana is another inconsistent item, but at times it has been excellent. At times I have found the breading, sauce, and cheese to have the same excellent quality that I found with the chicken parmigiana. Other times the breading has been too oily. The eggplant itself has always been good. 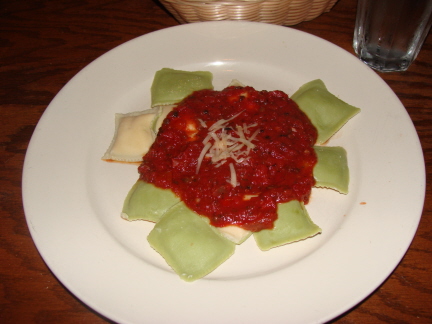 The Ravioli was a rather unique dish because the shells are specially prepared by a lady in town who supplies them to Caffé Pranzo. This is a rather simple dish with the shells and sauce, but I thought the shells were very good (with cheese inside), and were the main reason to try them here as opposed to other restaurants. It is a simple dish with simple flavors, but the freshness and quality are very good. 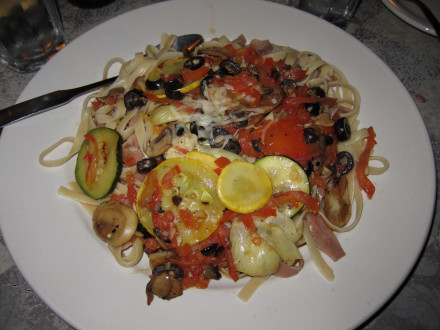 In an attempt to try something different I ordered the Primavera Aglio Olio (actually this was the first time I had ever tried this dish). The good part of this dish was the vegetables and pasta, but I thought it was very strong on garlic and olive oil (perhaps too much so). This is a vegetarian dish and I would recommend it, but several other meatless dishes seemed to have a better flavor, such as the pizza, linguini, and ravioli. 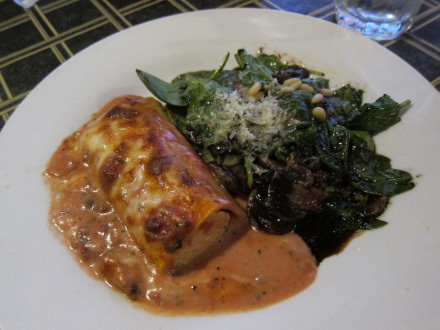 Chicken cannelloni (split in half)

This photo shows an order of Cannelloni split in half, so the full order is quite a bit more substantial. The wilted spinach salad makes an especially appetizing vegetable. The sauce on the cannelloni is also among the best I have tried.

Manicotti
The main disappointment I have had was with an order of Manicotti, and it also seems to have now been dropped from the menu. My dinner was not hot throughout, leading to the conclusion that it had been frozen or refrigerated, and not heated properly before serving. My dining companion did not want to send it back to the kitchen, and it was not cold to the point that it was inedible, but it was nevertheless strange that it would come out this way.

The manicotti came with a choice of sauces (marinara or alfredo) or a mixture of both. This provided a convenient way to test both sauces. As I suspected, I preferred the marinara sauce, but I did not care for the alfredo sauce as much as I thought I would. Maybe others have more of a taste for it than I do.

Closing Comments
Even Papa Dio’s, which is probably my favorite Italian restaurant in Oklahoma City, has certain dishes that I think are better than others, so it does not surprise me that the same would be the case at Caffé Pranzo. Caffé Pranzo has a surprising consistency in quality, though, compared to many other Italian restaurants. I say this because the few times I have had a bad experience here I did not tell the staff so they could make it right, which I assume they would have done. The fact that the salads, soups, and spaghetti are good here, though, tells me that this is a very good restaurant overall. 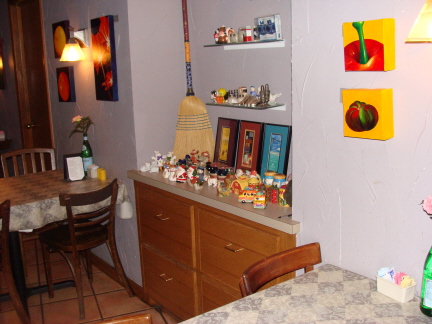 Each table has a different set of saltshakers, with others on display in the dining room

There is much on Caffé Pranzo’s menu I have not tried, so I do not think I have reached the point of having a conclusive list of recommended dishes. The ones I have listed as “best items,” though, are among the best in the city (as is the ravioli, even though it is not one of my favorite dishes).