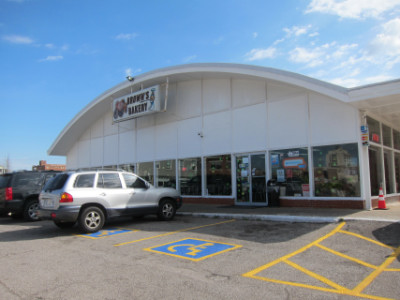 Brown’s Bakery is one of the few food establishments in Oklahoma City that is older than I am, but it also has a special significance to me in that it was the source of most of my birthday cakes while growing up. Just because it is old does not make it good, but I believe the fact it is so good is what has kept it around for so long.

Brown’s is located in the heart of Midtown, and the fact that it has its own parking lot means it is one of the few places you can find parking when you go there. Of course it is for takeout only unless you consider donuts as being a good breakfast, but still I think this is important because it pretty much ensures the bakery’s survival in an otherwise evolving neighborhood. 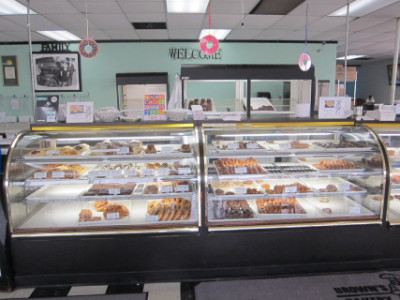 One of the displays at Brown’s Bakery

The overwhelming feeling I got upon entering the store was its sheer size and the variety of baked goods sold. In square feet and amount of display cases it dwarfs other bakeries such as Ingrid’s and La Baguette. I am not saying that any of these bakeries is better overall than the others, but Brown’s does hold the edge on the variety of items and the number of choices you have.

Shown here are the number of pastries they still had at noon, but several empty spaces indicate items that had been sold out, and other displays not shown in this picture have other types of pastries. 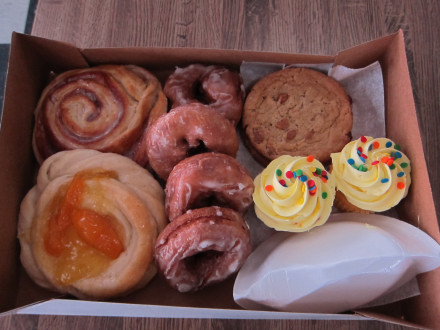 An assortment of items from Brown’s Bakery

This box contains what I took home to sample, and I can assure readers it was a hard choice being able to narrow it down to these items. Shown here from left to right are the Traditional Cinnamon Roll, Peach Danish, Applesauce Doughnuts (4 so that I would have enough), Peanut Butter Cookies, Lemon Cupcakes, and a paper plate inserted so the items would not slide around in the box. Not included this time was a birthday cake like I used to enjoy when I was young, but perhaps at some time I can report on this also.

An Assessment
I honestly put these items into two categories: (1) absolutely amazing that you must try, and (2) very good but about the same as you can get at other bakeries.

Foremost on the list was the Peach Danish, which I thought was one of the best I have ever had. To me this is a must try.

The Lemon Cupcakes were also quite exceptional, although they are so sweet a little bit goes a long way (I’m glad I was able to share them).

One of my personal favorites was the Applesauce Doughnut. They tasted like these doughnuts should, and from that standpoint are not “must try” standouts. Compared to many I have tried in Oklahoma City, though, I thought they were a standout.

In the “comparable to other bakeries” category I would put the Peanut Butter Cookies and the Cinnamon Roll. I cannot state a reason for this, only that this was the way they tasted to me.