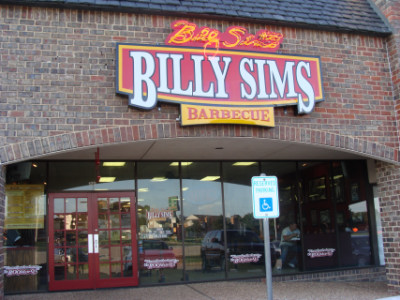 Barbecue may be one of the top two or three “must try” cuisines in Oklahoma, but with so many choices it is not an easy matter to recommend one specific restaurant. In the case of Billy Sims restaurant I have no hesitation recommending it (although not to the exclusion of some other very good choices). I would hate for visitors to come to Oklahoma and be disappointed by the “Q” (which, along with Texas, Kansas City, and the South, has become the standard of excellence). So far I have not been disappointed by the “Q” at Billy Sims.

Several of the meats at Billy Sims rate five stars on my rating scale, and this is pretty unusual for barbecue restaurants. Most Oklahoma restaurants do ribs the best, and I would say Billy Sims is about as good as anybody when it comes to flavor, quality, and smokiness of the ribs. Where Billy Sims is better than most is on the sauce– I don’t care much for the spicy sauce, but in my opinion the regular sauce is better than just about anyone’s.

The pulled pork and chicken at Billy Sims are better than most places, and for my taste they are equal to the ribs as “Billy Sims’ best.” In fact, I think they are better than the ribs in terms of the amount of meat you get for the money (unless you go on Tuesday night when they have an all-you-can-eat rib special).

Billy Sims has over two dozen locations in several states, and while it is not quite a national chain, it could easily suffer from the problems I see in many chains which have low quality food that is prepared off-site. I do not see any signs of this in the branch where I usually go on Northwest Expressway, though, and to me it tastes like locally prepared barbecue.

While going to Billy Sims over a several year period I have seen some inconsistencies in the quality of the food, but recently this has become a rare occurrence. I can usually count on my favorite meats (pulled pork, chicken, and ribs) as being good, but I am not sure about some of the others which I order less frequently. 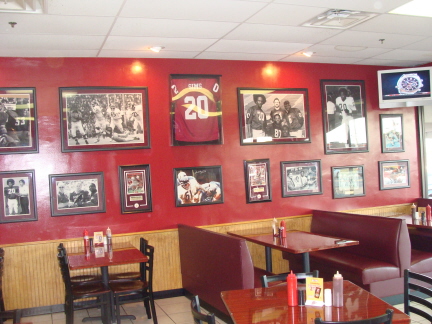 Some photos on display at the restaurant

Each of the Billy Sims Barbecue locations is adorned with football paraphernalia in tribute to the restaurant’s namesake. Even if some of us do not feel a fervor about the University of Oklahoma football program, where Billy Sims was a standout player, we can nevertheless be impressed by Billy Sims Barbecue, and I think people from any school will enjoy eating here.

The combo plates at Billy Sims used to have names such as “Sooner Magic” (Two-Meat Combo), “The Option” (three meats), and “The Wishbone” (four meats). The four meat combo is no longer served, and the others are just called “Two-Meat Combo” or “Three-Meat Combo” on the current menu.

There are seven types of meat served at Billy Sims including Polish sausage, hot links, turkey, bologna, and the ones already mentioned. The usual side dishes are available, and all dinners come with “Okie” toast, and your choice of pickles, onions, and peppers (all at no extra charge).

The iced tea is good, and the tea here is one of my favorites (at one time the tea dispenser said “Luzianne” on it but I’m not sure if they still serve this brand). Like all good barbecue places, Billy Sims offers a choice of regular or sweet tea. 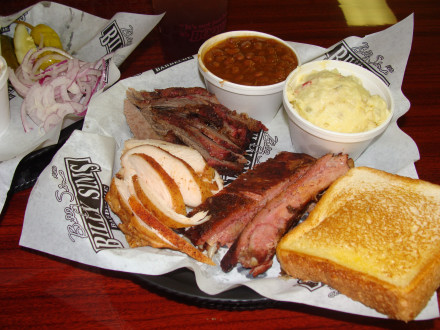 This photo shows three very good choices for meats. The Ribs are probably the restaurant’s most popular item, with not only the characteristic smoky flavor at Billy Sims, but also one of the moistest and best flavored meats. This is truly an item that I enjoy eating without the sauce, although I usually add a little sauce at the end for some extra flavor (the sauce here is one of the best, including the fact that I have not had any allergic reactions from it). While this photo is pretty representative of the ribs served at Billy Sims, I have found that sometimes they serve either more or less meat than is shown here (but it seems to be more consistent now than in the past).

The Chicken is probably notable mostly because of the fact that I usually find it disappointing elsewhere. This was moist with a good, smoky flavor, although I found it to be better with the sauce. In my opinion the chicken makes an excellent complement to another item such as pulled pork, but I rarely find the chicken exciting to order as a one-meat dinner.

I found the Brisket to be a little dry, but the smoky flavor was hard to beat. I still consider Van’s to have the best brisket I have tried in the metro area (and now I would add Clark Crew as a place to get good brisket). 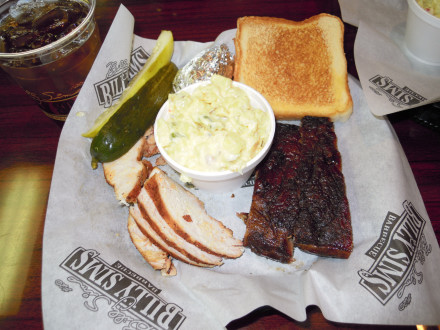 The Turkey was surprisingly good, and I say this because turkey is not normally one of the better items at barbecue restaurants. This one, though, was moist, and had a good flavored meat (with enough smoke to taste like real BBQ). Most of the time, though, the chicken is better. 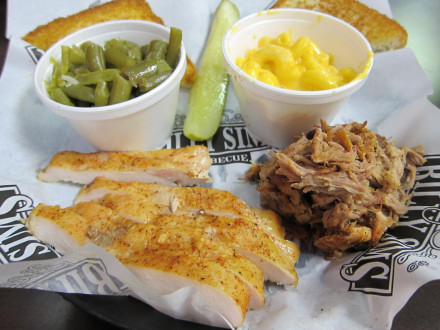 Chicken and pulled pork with green beans and mac & cheese

Pulled Pork is the other meat item that I think is outstanding at Billy Sims. This has a good smoked flavor and a good flavor to the meat. When dry (without sauce) I probably like it less than the ribs, but with the sauce I think both meats are equally good. 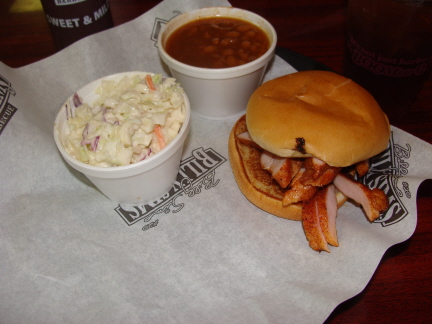 On one occasion I tried ordering the meat on a sandwich instead of the dinner plate, and I was a little disappointed with this. Of course the meat is the same on both, but there was something about the bread that did not give it as much flavor as I think it has when I eat it with the Texas toast (or the “Okie” toast, as it is called here). 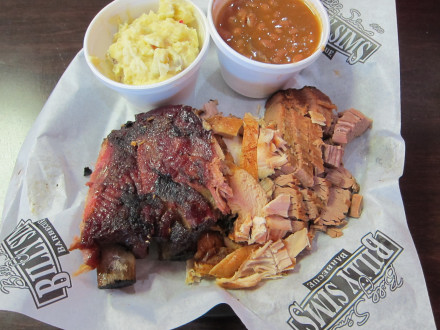 Ribs, chicken and brisket with potato salad and beans

Two side dishes are served with every dinner, and the two I usually order are shown in this photo. The Potato Salad here is better than the others I have tried in town, but I have to disclose that I really do not like the ones that have a mayonnaise flavor (the one here does contain a little bit of mayonnaise). Mostly I taste the mustard, though.

The Billy BBQ Beans are also excellent, and for my taste they are spicy enough without being over the top. 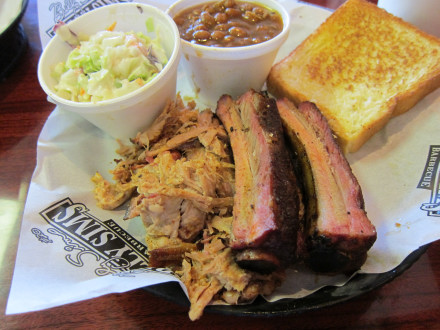 The Cole Slaw had seemed about average in flavor until recently. It seemed to improve about the time they added some additional side dishes to the menu, such as Mac N Cheese (very good) and Mini Corn On The Cob (probably even better although I have only tried it one time). The Green Beans, cooked with bacon, are always a good choice also.

Other Comments
The free pickles and other appetizers served with every plate are much more enjoyable to me than garnishes I have received at some other barbecue restaurants. The vegetable and side dish selection is not not Billy Sims’ biggest strength compared to other restaurants, but I do like the flavor of the ones here.

This restaurant is set up like a fast food place where you order at the counter and pick up the food at the register. It is not my favorite place in terms of ambiance (not because of the OU decor, but because it is often times cold– especially in summer when the fans and A/C are turned on high). They usually have interesting games on TV, although sometimes the volume is too loud. I come here for the food, though, and the food is some of the best you can get for the money.

My summary would be that ribs are the best item, and probably as good as anybody’s. Pulled pork is excellent here as well (and I think is definitely as good as anybody’s). Chicken is usually my second choice on a two meat platter to complement either the ribs or pulled pork (excellent flavor and quality here as well). Beans are the best side item. Usually I like potato salad as my second choice for a side, but several other side items are good as well. The iced tea and the barbecue sauce are two other reasons why I might pick Billy Sims over other choices, and the price is pretty competitive as well. 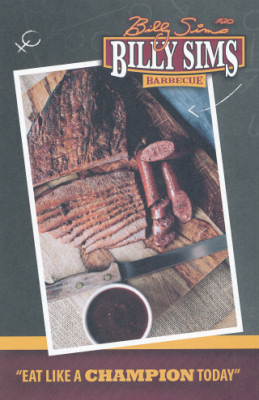 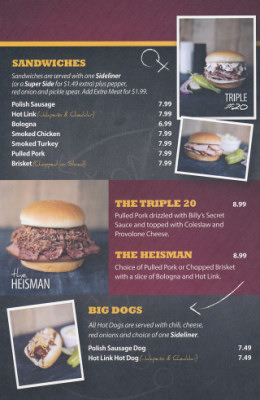 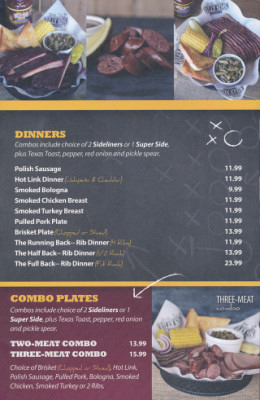 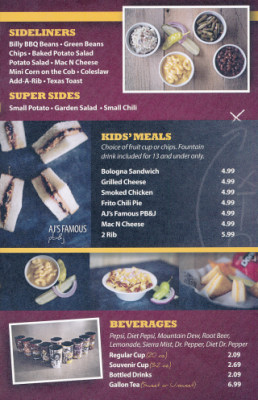 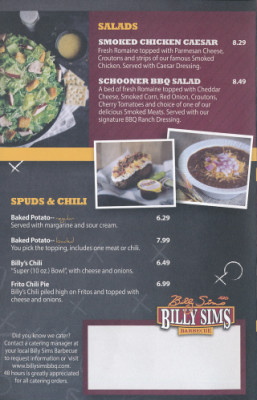 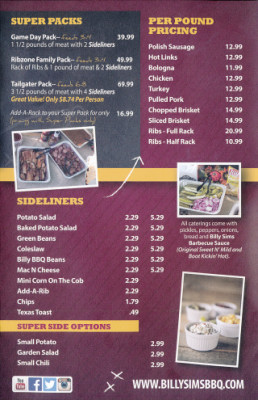