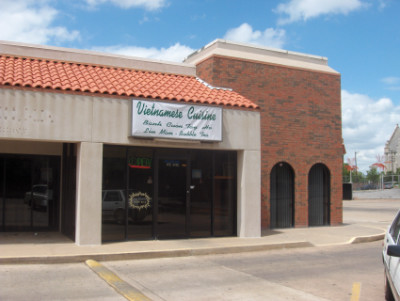 Note: Bánh Cuón Tây Hò closed sometime around 2009 or 2010, but until that time was one of the more authentic Vietnamese restaurants in the Asian District. It was part of a California chain of restaurants, and has a good reputation from the reviews I have seen. My review mentions that it changed owners, and I think I had better luck with the first ones (as someone who does not speak Vietnamese and was trying to understand the menu). The best dish I tried was Bánh Cuón (rice sheet wraps), the restaurant’s specialty. Lang’s Bakery, two doors down from the former Bánh Cuón Tây Hò, says they have a similar rice sheet wrap dish (No. 19 on the menu, described as “Slice Vietnamese Ham & Bean Sprouts over White Rice Noodle Sheets”).

It may be easy to miss Bánh Cuón Tây Hò. Located behind the larger Lido Restaurant in the same shopping center, patrons may be misled into the belief that Lido has the larger selection of authentic Vietnamese food, when in fact the menu at Tây Hò is probably just as extensive.

Bánh Cuón Tây Hò is actually “Restaurant #5,” something I discovered by picking up the take-home menu. The one in Oklahoma City is the only non-California location of this chain, and I got the impression that this food is good enough quality to be successful in California’s “Little Saigon” districts.

On my first trip I ordered the Bún, or vermicelli with vegetable dish, but it lacked the flavor I have experienced at Lido and other Vietnamese restaurants.

On a subsequent visit, however, I asked about the recommended dishes, and was told that Bánh Cuón (rice sheet wraps) was a good choice. I figured this must be their speciality, so I tried it. I had not seen rice sheet wraps in any other Vietnamese restaurant, and it was delicious because of the vegetables and sauces that came with it. You actually create your own sauce by adding the desired quantities of fish sauce, chile, and peanuts from containers on the table. Several meats and tofu toppings are available. Recently they began adding yams in a tempura breading to the dish, and I now like it even better than before. 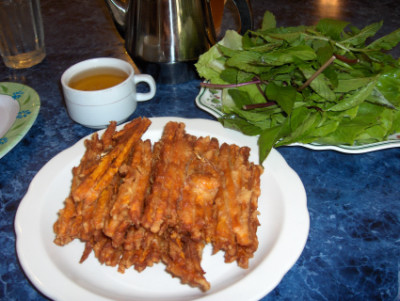 The “Yam Sticks” (I don’t know their proper name) can be ordered as a stand-alone order (as shown in the photo above), but I did not care for them this way (I only ordered them because I misunderstood the menu, and thought they were a vegetarian version of the rice wraps).

The Tofu Delight was quite good– comparable to the ones served at some of the better Chinese restaurants. Most Vietnamese restaurants in OKC serve Chinese dishes, but this was one of the few that had a true Chinese flavor.

The special hot tea was really a treat, brewed with loose leaves.

The restaurant has changed somewhat since my first visit in 2005, and seems to have new owners now. For instance, tempura yams have been added to the bánh cuón dishes, and Vietnamese ham is also included. The prices have increased, and some of the dishes seem to have changed. The food is just as good as before, and apparently the “ham and yam” combination is the typical Vietnamese way of serving the dish (although I do not know why it was not served previously).

Hot tea is no longer on the house, and it has not been consistently made with the excellent loose leaves I experienced on my first visit.

On my early visits I did not care much for some of the items other than rice wraps, but that may have changed for the better with the new owners and cooks. I just know that with the exception of some Chinese lunch plates, the restaurant tries to present authentic Vietnamese cooking. I have experimented with a few items, but there is much more available that I have not tried.