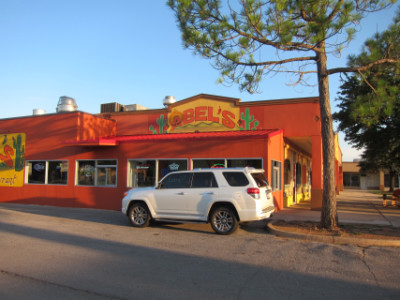 In my previous review of Abel’s I saw it as one of the pioneering Mexican restaurants north of Interstate 40 that served authentic Mexican food rather than one that would cater mostly to American tastes. From what I have heard the idea that authentic food could not be marketed successfully dissuaded Rick Bayless from joining a venture that wanted to serve traditional Mexican food in the complex of restaurants on the eastern shore of Lake Hefner. To be technical about it, Adobe Grill was the true pioneer for Mexican food on the north side although it was close to the State Capitol and the business district, and was not relying primarily on suburban areas for its customer support.

Now the situation is very different, and I think Oklahoma City does a much better job than most in knowing what it takes to serve authentic Mexican food (not to mention the largely Hispanic south side of the city which has always had restaurants that came much closer to meeting this goal). In my experience, though, the south side’s authentic food was largely at the street food end of the culinary scale.

Abel’s itself opened at a time when a large number of potential customers were expecting Oklahoma’s attempt of Tex-Mex to be available (I am sorry, but I always thought you had to go to San Antonio, Austin, or maybe Houston to experience the best Tex-Mex food). In any case, Abel’s devotes a portion of its menu to Tex-Mex style food. I do not mind a restaurant serving any type of food that it wishes, but I think the menu does not clearly differentiate the authentic food from the “local” style. I usually get answers from the staff to tell me which food is their authentic version, but even with the “real” Mexican food there are some dishes that I think are better and more worthwhile ordering. Abel’s serves Calvillo style Mexican food which originates in the state of Aguascalientes, and is from where many of the restaurateurs in Warr Acres and Oklahoma City immigrated. It helps having the same items at different restaurants across the city, but for some I think Abel’s does them better than anyone else. It is largely these that I have highlighted as the best items to order.

One place where I think you really cannot go wrong at Abel’s, though, is its street food (tacos, tortas, quesadillas, gorditas, etc.). I have always enjoyed this type of food, but Abel’s has been the best restaurant at making a satisfying meal composed solely of these items. They have what I think is an even better deal if you go after 9:00 p.m. where they serve only these items and they are at a cheaper price (the “after hours” meal also comes without chips, queso dip, etc.).

For me the most special part of the street food menu is the tacos al pastor, simply because I have not found anyone else who does them as well as Abel’s. 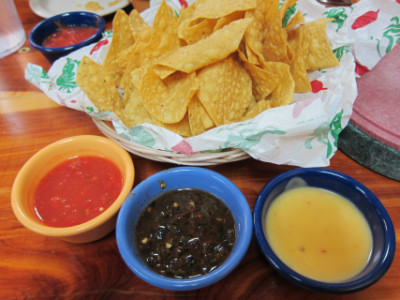 Any order served through 9:00 p.m. will have complimentary chips, salsa, and a cheese sauce (those after 9:00 will get salsas that go with the tacos or other items that are ordered). The dark colored salsa in the middle is the spicy salsa which I requested. I think the salsa and cheese sauce have gotten better over time to the point that I probably would not request the spicy salsa (and I am not sure they still have it since the regular salsa is now spicier than before). 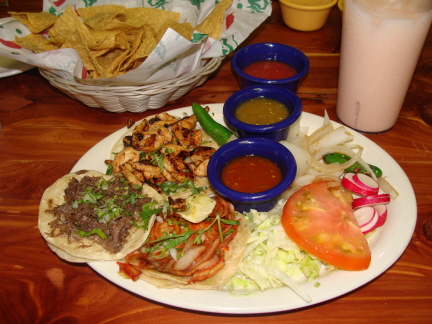 The “Mexican Menu” is the menu of street food items served a la carte that includes tacos, tortas, quesadillas and gorditas.

The picture above includes two of my favorite items: Taco al Pastor and Chicken Taco. The chicken is grilled, and is especially good with the salsas they give you for the tacos. The Taco de Barbacoa did not have a flavor that I liked as much as ones I have had in El Paso (it seems that the best barbacoa is in restaurants that specialize in it and that this is the only type of meat that they serve). 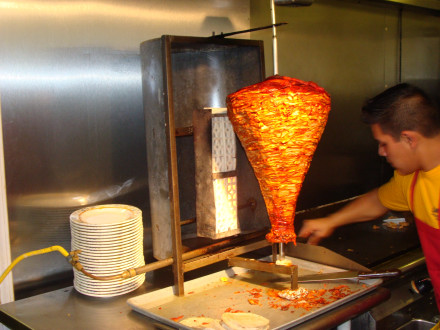 Meat for tacos al pastor being sliced off from the rotisserie

The tacos al pastor, on the other hand, seem to be one the specialties of Abel’s. The rotisserie where they cook it is visible from the dining room so that patrons can see that it is done the right way. The meat is slow cooked, and they make liberal use of pineapple for flavoring. The spices used for flavoring give it somewhat of a kick, but the real spice comes from the salsa you put on yourself if you want it. At times the meat has been a little dry, but most of the time the tacos have been excellent and certainly the best I have found in Oklahoma City (or in El Paso either). 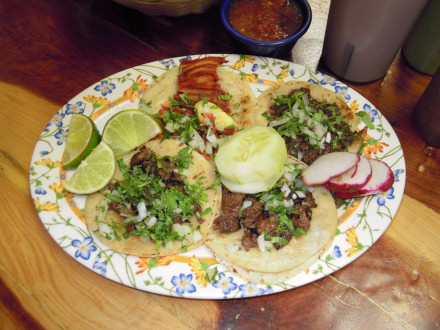 The Tacos Calvillo are clearly another specialty of the restaurant, if not the best dish served. This is a tender steak with cilantro, onions, and a special sauce. The quality of the meat is certainly among the best served, and the flavor is excellent.

Tacos de Birria are available only on weekends, and I would say they were moist and tender but did not have a flavor I enjoyed as much as the tacos Calvillo. The meat is traditionally made from goat, but I did not ask about the tacos at Abel’s. Even though the meat was a little different, the seasoning was quite good. The waiter said the meat was steamed and cooked overnight. 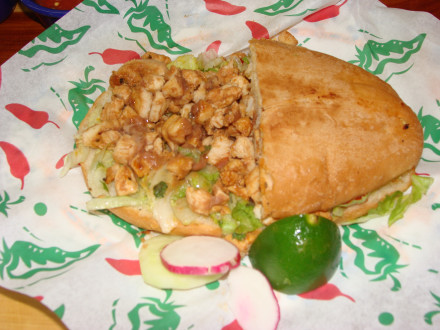 The Torta de Pollo, also from the Mexican menu, was a very good traditional Mexican style sandwich. The meat was good quality, but the seasoning is probably what makes this better than the average Mexican style chicken. 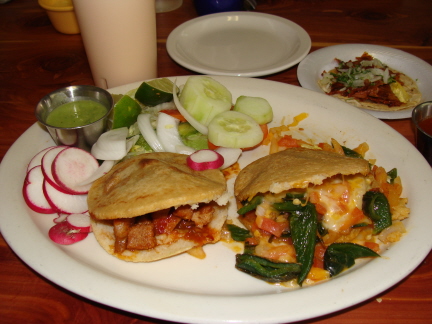 The Mexican style Gorditas were a good example of items that could be ordered from the Mexican menu (written on the wall and on the small menu). This menu provides just about any type of meat or filling desired. I tried the guiso (pork with red chile) and rajas (whole green chiles with Mexican cheese) that were both excellent. Guacamole was served on the side along with some spicier salsa than is initially set on the table and garnishes of cucumber, radishes, and onions. It is up to the server to provide you with the garnishes you want, though, and all are included in the price. 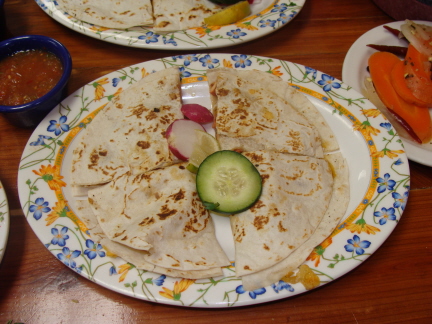 The Chicken Quesadilla was the most expensive item from the Mexican menu, and one order is pretty much a meal in itself. The servers did say, though, that we could get a “half and half” order with two different kinds of meat. 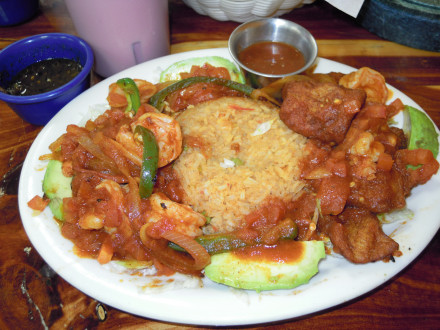 The regular menu is where you get a complete meal as opposed to ordering each item a la carte.

One good choice was the Efrain Especial, a seafood dish which I ordered on the waiter’s recommendation. This came with the “Efrain Especial Sauce,” a tomato based sauce that gave it a traditional Mexican flavor. This dish was more than filling, with nine large shrimp plus catfish. I was served a “half order,” which I thought had just the right quantity and came at a good price. Beginning in 2012, though, the servers told me they no longer served the half order, so I now have to qualify this by saying that for my appetite it would be too much food (and also I do not look forward to the higher price).

The Efrain Especial did have some flaws, with the catfish seeming to have a better flavor than the shrimp. The salsa served on the side was a good touch, though, and the avocado was flavorful.

The seafood dishes at Abel’s are popular as a Lent meal before Easter, but as I found out they are good any time. They do not have Lent specials per se, but I think a good meal can be had with their seafood dishes or cheese enchiladas.

The fresh Melón Agua Fresca (Cantaloupe drink) was very good, and became my drink of choice just about every time I went to Abel’s (although now I like to get iced tea to reduce the calories). 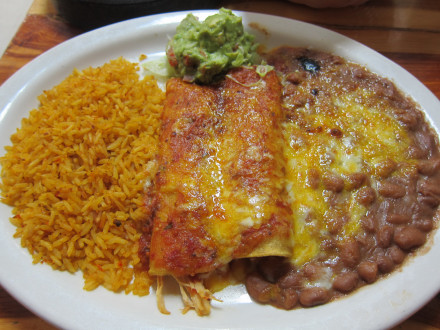 The Enchiladas Rojas had a flavorful sauce that was about as spicy as the usual ones to which I was accustomed in El Paso (with a spiciness level of 4– just about right for me). I thought this was one of the best red sauces in Oklahoma, although I am not sure the cheese they use is my favorite (they say they use Monterey Jack). The default filling is beef but others are available such as chicken or shrimp. 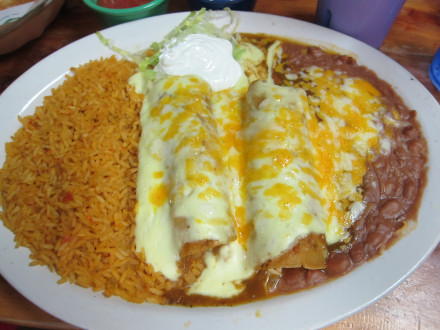 The Enchiladas Verdes (green enchiladas) are another dish that I consider to be authentic. The green chile (actually tomatillo sauce) is on the inside of the enchilada, thus the lack of green color on the outside. Some of the positives of the dish include the spiciness level (four on my scale of 1 to 5), and the fact that the default chicken filling is a good flavor combination with the tomatillo and the cheese sauce on top. Additionally there is a scoop of sour cream on top but it does not taste like the Mexican style crema to me. I think it tastes fine, though, if you just skip the sour cream. 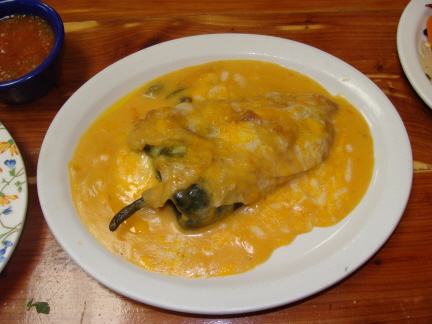 Now I get into the part of the menu that I did not like as much, including the Chile Relleno. My experience in Mexico was that they usually put a red or green sauce on it, and in New Mexico it is often times served plain with no sauce on top. I would give a wide latitude concerning the sauce people want to use, but to me having it smothered with cheese is not the best choice. Chile rellenos have cheese inside, and I think there should be no need to put more on top. The actual chile at Abel’s was better than most I have had, though, so I can say my problem was only with the style and not the food itself. 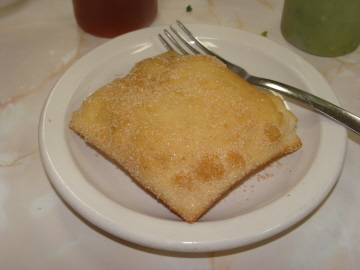 They have a dessert menu which includes items such as the Sopaipilla. I think this sopaipilla is about average for the ones in Oklahoma.

Other Observations
I find the red and green enchiladas here to be among the best in Oklahoma City. Equally important, though, is that on my last order I gave five stars to most of the other elements as well (rice, chips, salsa, queso dip, and cantaloupe drink). The only thing that fell a little short was the refried beans, although they were still better than most of the ones in Oklahoma City.

The other “must try” part of the menu for me, though, is the street food. This can be ordered a la carte from the “Mexican menu” which is available on a separate menu and is also posted on the wall as you come inside the building from the front door.

I used to find the restaurant very busy on weekends to the point that I had to wait for a table, but I have not tried going at these times lately (and I do not know how things are after the pandemic).

It was hard to assign a rating to this restaurant because much of what I like is the street food. This is not alta cocina cooking but it is very good–in fact some of the best I have ever had.