Warning: The magic method Gallery_Img::__wakeup() must have public visibility in /home/foodblog/public_html/wp-content/plugins/gallery-images/gallery-images.php on line 97
 A Walking Tour of the Asian District 2020–Oklahoma City, OK | Steve's Food Blog
Skip to primary content


Note: My original article described the east side of Classen Boulevard from N.W. 30th Street to about N.W. 25th Street where Super Cao Nguyen grocery store and Lido Restaurant are located. This tour follows the west side of Classen from N.W. 26th Street south to N.W. 23rd, and then north to the point where the last article ended. There are still some areas I have not covered in either article including along N.W 23rd Street both east and west, and the northern portion of Classen Boulevard.

Starting out at Grand House I could see across the street that Golden Phoenix is being renovated and is currently closed. 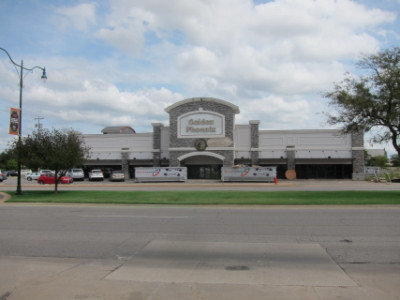 Golden Phoenix on the east side of Classen Blvd.

Large bins are located in front of the restaurant to take out the old material they are discarding. I assume the cars parked in front are for Chinatown Supermarket located on N.W. 27th Street (next door to Golden Phoenix). 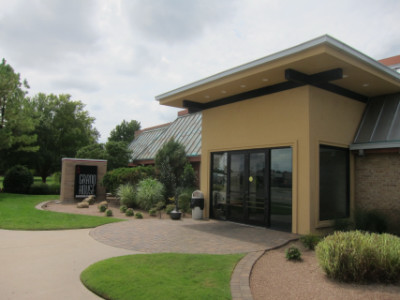 Grand House is open and doing business as usual, but it seemed somewhat deserted compared to previous times. They no longer sell cakes from La Baguette (but the display is still there indicating that this may come back in the future). Grand House still has the same menus it did in the past (lunch menu, regular menu, and Chinese menu). 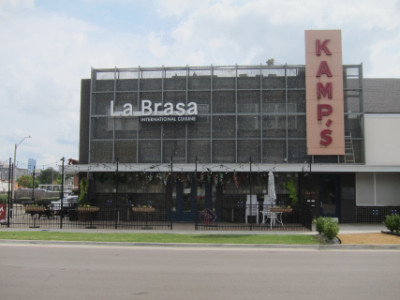 A block south of Grand House is La Brasa Peruvian Restaurant. It looked quite deserted, and it turns out that it is only open for dinner and is closed Sunday through Tuesday. I could not figure out Kamp’s next door because I know Kamp’s Deli moved a number of years ago. Google Maps says that this Kamp’s is a lounge and music venue (I do not know if it serves any food). 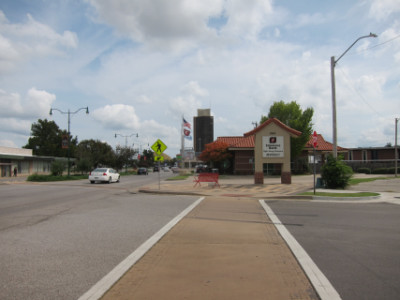 Just east of Kamp’s on Classen Boulevard is Simmons Bank, which is one of the few businesses in the area that makes an attempt to have a Chinatown like architecture.

In the same block as Simmons Bank is the Quoc Bao Bakery which was open but I did not go in to investigate (but made a definite mental note to do so later). One thing that threw me off is that they sell egg rolls, but apparently their specialty is banh mi sandwiches. 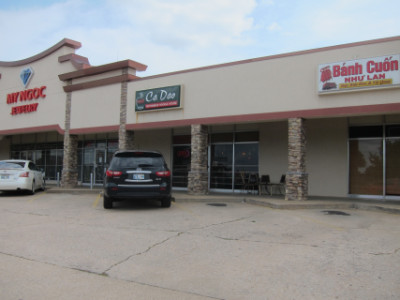 I next encounted Pho Ca Dao which had impressed me as having the most authentic chicken vermicelli dish I have found at any Vietnamese restaurant in the Asian District (this was especially true of the fish sauce they used). They are open and have dine-in service.

The “Banh Cuon” sign next door is over a space that appears to be empty. 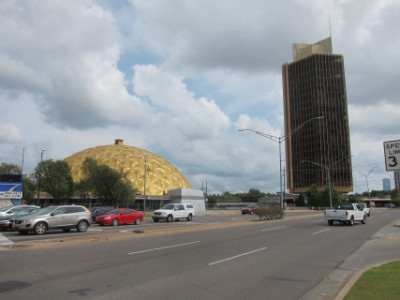 Just south of N.W. 23rd are two architectural landmarks of Oklahoma City, the Gold Dome and Classen Luxury Apartments. These are not technically in the Asian District, but are definitely part of the ambiance of the area. The Gold Dome was said to have been slated for demolition a couple of times, and has thankfully been rescued, but I am not sure of its present tenant if there is one. 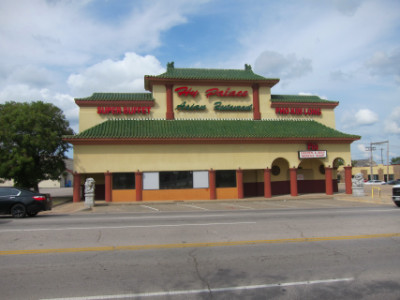 Hy Palace across the street from the Gold Dome

Across the street from the Gold Dome is Hy Palace which is “two restaurants in one.” One is the Super Buffet and the other is Pho Kim Long which is one of the more authentic Vietnamese restaurants in the city. I did not go inside but apparent they have dine-in service. 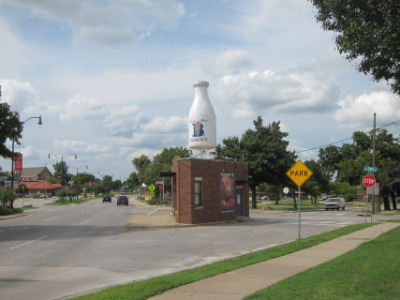 One block north of Hy Palace (after passing CVS Pharmacy) is another iconic landmark in the area, the “Milk Bottle” building which started out as an early version of a  convenience store before companies such as Seven-Eleven existed. The last business I saw there was a banh mi shop, and like the Gold Dome this building has been preserved but probably has an uncertain future. 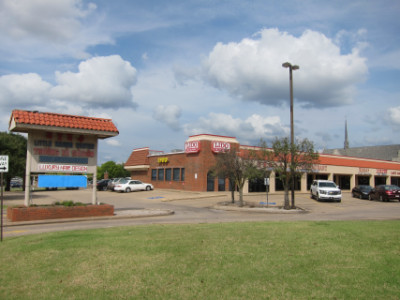 Lido Restaurant, located a half block north of the Milk Bottle, is one of the oldest (maybe the oldest) Vietnamese restaurants in the city. It seems to have a reputation of being Americanized so that the non-Asian population of Oklahoma City could become acculturated to Vietnamese food. I find it to be quite good, though. I think its fish sauce is somewhat Americanized, but most other aspects of the food are quite flavorful and seem to have a very Asian style. 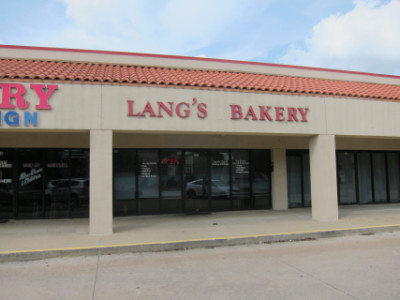 Lang’s Bakery is located in the same shopping complex as Lido, and is open for business including dine-in service. This is another one of my favorite hole-in-the-wall places which are a source of frustration because I cannot visit them as often as I would like (perhaps I should look into moving into the Luxury Apartments so that I can be closer to them). 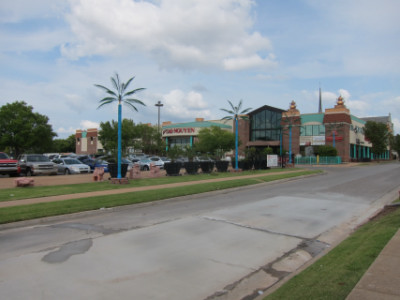 Super Cao Nguyen is one of the two major grocery stores in the Asian District (the other is Chinatown). It seems from the Chinese cooks I know that Chinatown is a better source for most of what they need regularly, but both of these stores have areas in which there is a larger or better selection. The ones I find here include Chinese tea, candies, and drinks. On this trip I discovered a pretty good selection of Chinese medicines but I do not know if Chinatown has something that is equivalent. 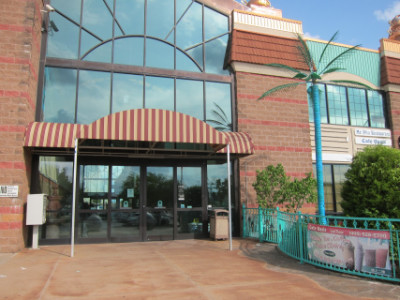 Next to Super Cao Nguyen is an enclosed area that started out as somewhat of a shopping mall but now I only saw two businesses still open. One was Cafe Oasis which I described in my previous article. 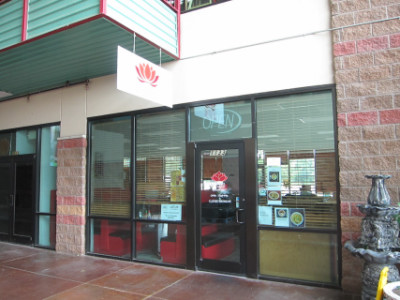 Lotus Thai is also open for business but was closed on Monday when I made my tour of the area. This was the only restaurant I found on the first floor (on past visits there were anywhere between two and four).

The Internet has not been giving complete and up-to-date information about the status of restaurants after they were allowed to reopen this summer. This is particularly true about the smaller restaurants such as many of the ones in the Asian District.

One surprise to me was to see how many of the restaurants that were operating before the COVID pandemic are still operating (technically they could still have takeout and delivery service during the time from March to June when the dining rooms were closed). Although a high percentage of Asian restaurants in the suburbs are now only offering takeout and/or delivery, all of the restaurants I saw in the Asian District have dine-in service.

The one outlier is Golden Phoenix, which first was offering takeout only and now is temporarily closed for renovation. I was surprised about this because it was completely rebuilt after the fire that destroyed the old building a few years ago. I have heard from sources who seem to know, though, that Golden Phoenix does plan to reopen.