The Chinese New Year is a time for family to come together and have a time of celebration.  This seems to be the one time on the Chinese calendar when business shuts down and extended families are not only provided the opportunity to all be together, but there is a strong social expectation that they will do so. 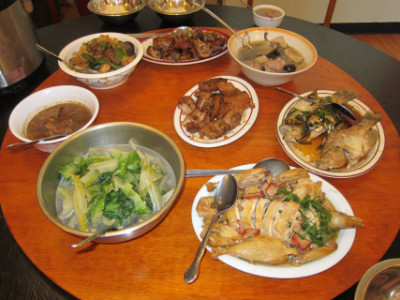 The New Year usually extends for several days, although it seems that business gets back to normal pretty quickly.  Family get-togethers in the evenings are common during this week, particularly because some people travel great distances to be with their family and they want to take advantage of the opportunity.

The standard protocol is for young families to spend the first day of New Year with the husband’s parents or family, and to spend the second day with the wife’s family.  Thus it is standard for there to be at least two New Year’s meals, but at times there are more (if they are able to extend the visits).  This is first and foremost a family holiday, but at times friends and visitors come in also (this is mainly how I have been able to experience traditional New Year meals and have come up with an idea of what it all means).

Even if a family cannot normally afford good food, they make a special effort to enjoy the best at New Year.  Thus the “traditional” New Year meal consists of the best that Chinese food has to offer (within reason, of course).  I sometimes think Chinese “banquet food” is too much and I would rather just eat the everyday stuff, but when it comes to the New Year’s meal I really do think this is some of the best Chinese food I can experience.

The table itself is very impressive for this meal.  Traditionally the family sits at a round table with a lazy Susan in the middle.  The food is served “family style” where all diners helps themselves.  I think there is always enough food so that everyone can eat all they want and there will be leftovers (sometimes these are used the next day for the second meal).  Beer or alcohol is traditionally served, because the object of the meal is to talk and have a good time.  The server can enjoy the food along with everyone else because everything is on the lazy Susan and there is no need to be constantly serving the guests.

The traditional dishes served all have a specific significance, and are meant to bring good luck throughout the year.  I have noticed that there are multiple dishes that bring money, good health, or good luck, so families have some choice about which dishes they want to serve. 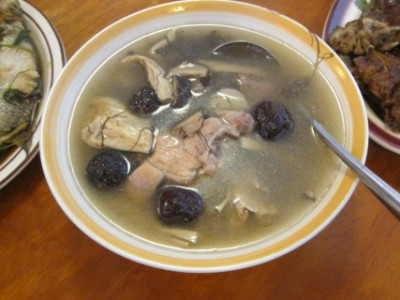 The photos in this article are for a Cantonese style New Year dinner, and although there is some variety from meal to meal, there are also some common elements.  One dish that seems to be essential is a soup called fa cai tang (fa cai is called “fat choy” in Cantonese).  The fa cai is black moss (literally “hair vegetable” in Chinese).  In Cantonese “fat choy” sounds very much like the words for “make money” or “multiply money” in the greeting used for New Year “wishing you prosperity.”  I won’t try to claim that I am a Chinese linguist, but this is what ties this vegetable to the New Year celebration.

The soup also contains dates (sweet plum), tofu skins, water chestnuts, and pork.  It also sometimes contains dried seafood (but not in this particular soup).  The front leg of the pig is used specifically because it is called the “hand” in Chinese.  The hand is used to reach out and take things (usually money, but it can also mean finding a marriage partner).

The dates are also symbolic of having children (as are peanuts).

I have also seen at times that the family lets the head of the household or the main breadwinner partake of the soup first (the good luck for making money is apparently enhanced for the person who eats the soup first).  I think this only works the first day of New Year, though, and after that anybody can eat the soup any time they wish (and I think this soup is delicious). 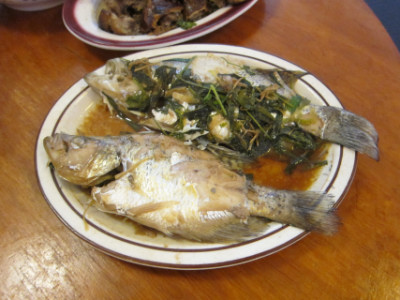 Steamed fish is important because if you make money, you want to be able to keep it.  The word “fish” sounds like the word for “abundance,” and the whole fish is supposed to represent a prosperous year from beginning to end (you can save the extra money when you have it and use it when you need it). 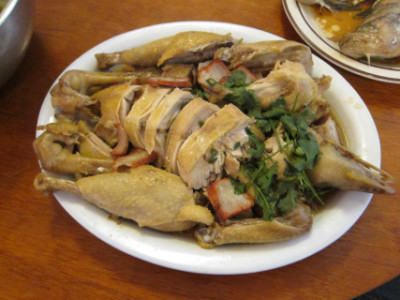 Sesame oil chicken at New Year is for a “good life”

Sesame oil chicken is not only delicious but it is part of the New Year’s “good luck” theme.  I have been told that the Chinese words for “chicken” and “world” sound very similar, so eating the chicken symbolizes having a good life (something like having a world of possibilities).  I think maybe people eat this because it is so good, and the symbolism of it is a bonus. 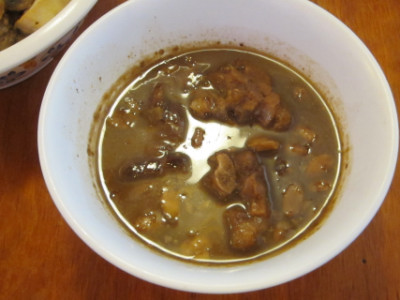 Sweet and sour means you will attain your goals without difficulty

The bowl of sweet and sour has a different taste than the sweet and sour sauce found in most restaurants, and has a more complex flavor than just the sweet component.  At New Year, though, it is eaten mainly for its symbolism (also, though, I think it makes the meal a little more enjoyable).  The meaning of it is that anything you do this year will be easy, and you will not face difficulties in accomplishing it.  I do not know, though, if this is because of the name of the dish or the ingredients in it. 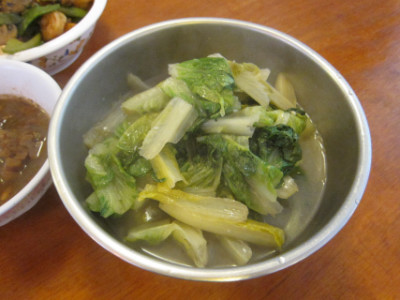 This cooked lettuce (sang cai) is for getting more money

Lettuce means having good luck and getting more money (probably because of its green color, but I am not sure about this). 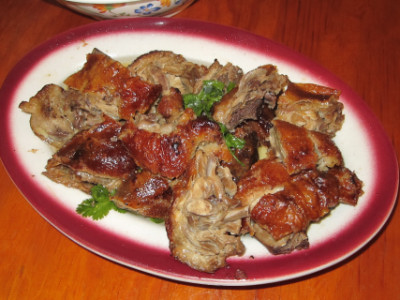 Who wouldn’t be happy eating this delicious dish?  The problem with roast duck is that it is probably the hardest to cook out of all the ones served at this meal.  I was told that this one came from Golden Phoenix in Oklahoma City. 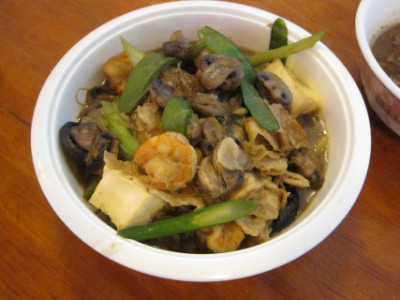 Tofu and shrimp with a number of other ingredients

I was not clear about the meaning of this dish except that shrimp represents vigorous health and being active. 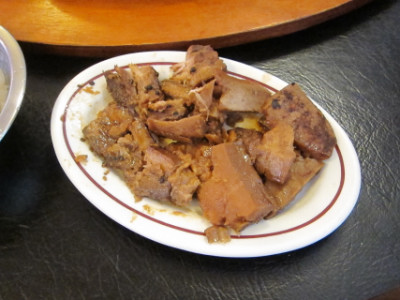 This pork and taro dish is something they like–it does not have a special significance for New Year (they probably have everything covered by all the other dishes that were served). 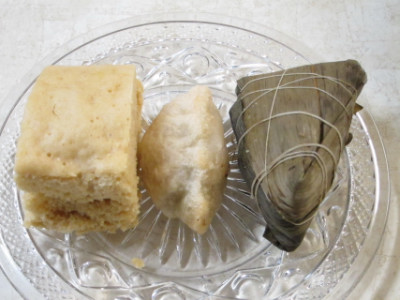 I believe that normally there is not a formal dessert with Chinese New Year.  Instead, snacks, candy, and treats are usually available for munching.  Here are three that I took home.

For any Chinese family the most important aspect of New Year is for the family to get together if possible.  The families living in the United States do not always find it possible, especially since work schedules do not usually let employees off for Chinese New Year as they do in China and other Asian countries.  I think these families keep tradition as much as they can, but the important thing is always for families to get together when they can and to enjoy themselves when they do.

At times I have ordered a Chinese New Year meal at a restaurant to eat with my family and friends, and I think this is a good tradition as well.  I have found many restaurants to be all too willing to provide the food if they have customers who want to order it.  I mainly enjoy the food and the fellowship, but it is good to know something about the traditions behind it as well.